Ombudsman to SC: No to bail for Napoles | Inquirer News

Ombudsman to SC: No to bail for Napoles 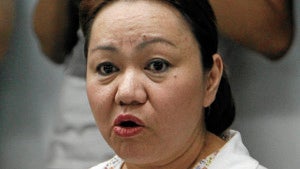 MANILA — The Office of the Ombudsman has asked the Supreme Court to dismiss the petition of suspected pork barrel scam mastermind Janet Lim Napoles for bail in the plunder case where she stands as a co-accused of former Senator Juan Ponce Enrile.

In a 34-page comment dated May 18, the Ombudsman’s Office of the Special Prosecutor said the Sandiganbayan Third Division correctly denied her bail petition on  grounds of strong evidence against her.

The anti-graft court denied Napoles bail on Oct. 16, 2015, as well as her subsequent appeal on March 2, 2016. This prompted her to elevate the matter before the high court, which ordered the prosecution to comment last November.

The OSP urged the high court not to reverse the Sandiganbayan resolutions because they were not attended by grave abuse of discretion or “gross misapprehension of facts.”

The prosecution said it was correct for the court to deny Napoles bail on the strength of the testimonies by pork barrel scam whistleblowers Benhur Luy, Marina Sula, Merlina Suñas and Mary Arlene Baltazar.

These witnesses testified that the dubious non-government organizations that received Enrile’s Priority Development Assistance Fund allocations were controlled by Napoles, whose signature does not appear in the documents.

The OSP said there was “no cogent reason” for the Sandiganbayan not to rely on the “unrebutted” testimonies including those by Luy and self-confessed bagman Ruby Tuason.

It noted that “despite full opportunity,” Napoles did not take the witness stand during the 2014-15 bail hearings to disprove or deny the accusations of her former employees.

The prosecution said she “obviously [did not want] to expose herself and her lies in open court” back then.

“The whole mass of unrebutted testimonial and documentary evidence of the People, which were meticulously and judiciously discussed by the Sandiganbayan in the assailed resolutions, all prove that Napoles and her co-accused performed and contributed necessary acts to carry out the conspiracy and the commission of Plunder,” the comment read. 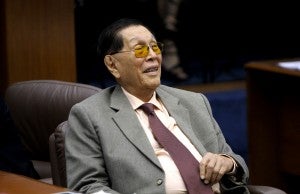 In this January 18, 2016 file photo, then senator Juan Ponce Enrile attends a session at the Senate.  (INQUIRER PHOTO / RICHARD A. REYES)

The prosecution also derided Napoles’s attempt to cast doubt on the testimony of witness Ruby Tuason.

Tuason claimed she was an agent who delivered the alleged kickbacks to chief of staff Jessica Lucila Reyes on Enrile’s behalf, but Napoles questioned why Tuason did not ask for an acknowledgement receipt.

On the contrary, the prosecution said Napoles’ proposition and not Tuason’s was “the one incredible and contrary to common human experience.”

“The transaction is illegal. To be sure, accused Reyes, or any high-ranking public official for that matter, would not issue a receipt for receiving a bribe,” stated the comment.

Under the Revised Rules of Criminal Procedure, offenses punishable by reclusion perpetua (up to 40 years’ imprisonment) are non-bailable when the evidence of guilt is strong.

The Supreme Court in a controversial August 2015 ruling had allowed Enrile to post bail for an otherwise non-bailable case on the grounds of “special, humanitarian and compelling circumstances.”

Besides the Enrile case, Napoles was also denied the right to post bail in the plunder cases where she is also the co-accused  of detained former Senators Ramon “Bong” Revilla Jr. and Jose “Jinggoy” Estrada.

Napoles was recently transferred back to the Bureau of Jail Management and Penology faculty at Camp Bagong Diwa in Taguig City pending the plunder trials. She was recently acquitted by the Court of Appeals in the case of Luy’s illegal detention.  SFM/rga

Read Next
Rep. Umali refutes stonewalling impeach bids at House
EDITORS' PICK
Percy Lapid’s kin: ‘We demand that his cowardly assassins be brought to justice’
Nothing’s certain so here’s how everyday Filipinos can make the most out of their Plan B
Do all the things you do, faster
PNP vows to bring justice for slain Percy Lapid; says probe underway
House energy committee chair Arroyo bats for cheap electricity
‘Seniority’ requirement despite vacant posts in DOH bothers senators
MOST READ
Student stabs teacher dead in Samar town
Trixie Angeles quits as press secretary due to health reasons
Not rehired?: Trixie Angeles not on list of reappointed Cabinet execs
Heart Evangelista to stay abroad ‘indefinitely’: ‘Hindi muna ako babalik’
Don't miss out on the latest news and information.