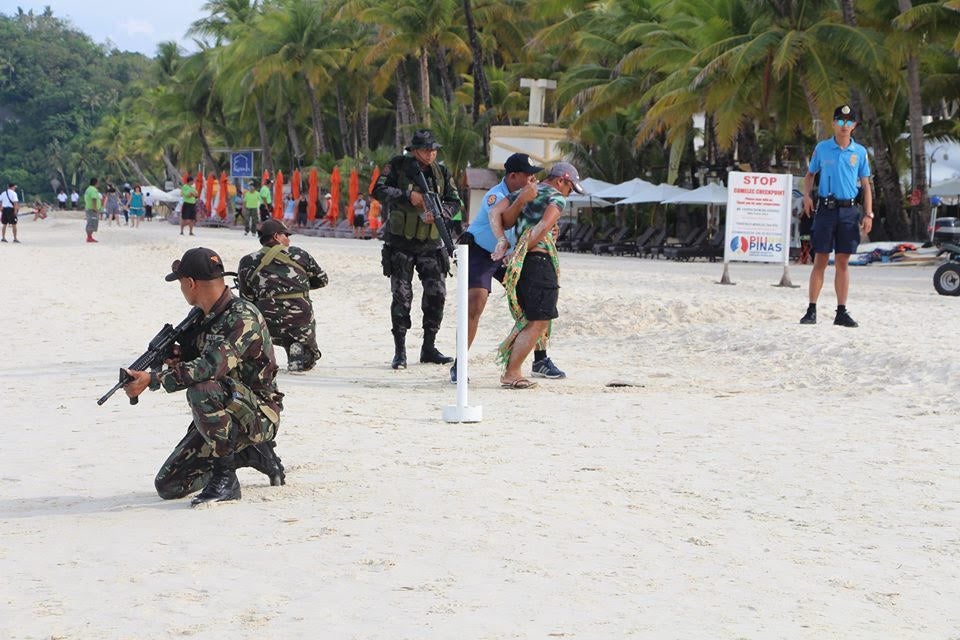 ILOILO CITY — Gunfire and explosions erupted along the white beach and waters of Boracay Island on Saturday as security personnel “clashed” with “kidnappers.”

But the tourists were not scared but were instead drawn to the armed men along the beach near Boat Station 1, at the northern end of the island.

Security personnel were holding a simulation of an attack on the island as part of enhancing security and safety measures on the popular island-resort.

Some 100 personnel were involved in the 25-minute exercise to demonstrate and assess the capability of the newly launched Joint Task Force Boracay, said Rowen Aguirre, the task force’s executive director.

The exercise simulated the incursion of a group of armed men planning to kidnap tourists on the island.

In the exercise, several “kidnappers” were intercepted at a checkpoint with some “killed” and others “arrested” after a firefight using blanks.

Based on information derived from interrogating those arrested, government troops located improvised explosive devices planted by the kidnappers. These were then disabled through controlled explosions.

Another phase of the exercise involved intercepting another group of kidnappers who commandeered a motorboat and attempted to flee from the island. 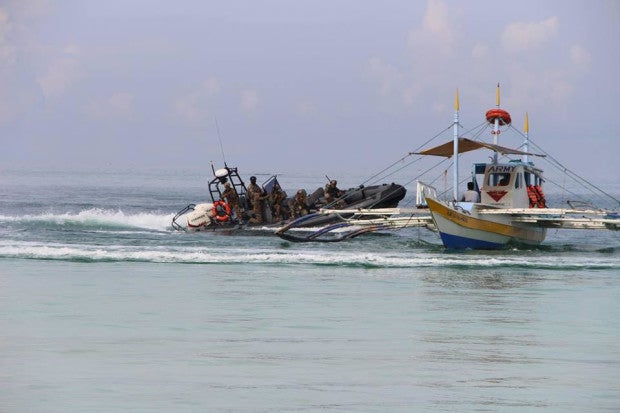 The Philippine Coast Guard, Navy and the National Police Maritime Group simulate sea defense and counter-attack in case of terrorists attacking Boracay Island, on May 22, 2017. (Photo courtesy of the Boracay Tourist Assistance Center)

Philippine Navy units also intercepted and clashed with another group of kidnappers who were about to join those already on the island.

Aguirre said the creation and activation of the task force was already set even before last month’s incursion of Abu Sayyaf bandits in Bohol, also a popular tourist destination in the Visayas.

But he said the Bohol crisis emphasized the need for security preparedness even if 1,032-hectare Boracay is much farther from the base of the bandits in Basilan and Jolo.

“It would be difficult for them (Abu Sayyaf) but not impossible,” Aguirre told the Philippine Daily Inquirer.