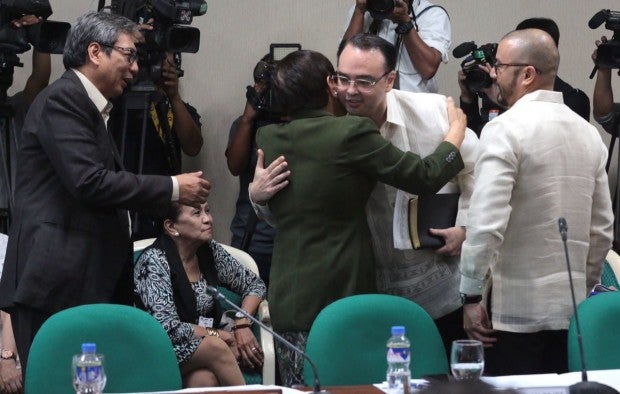 Members of the Commission on Appointments congratulate Senator Alan Peter Cayetano on his appointment as the new foreign affairs secretary at the hearing in the Senate on Wednesday May 17, 2017. INQUIRER/Grig C. Montegrande

Now that he is the Philippines’ top diplomat, former Sen. Alan Peter Cayetano, who could be rough in dealing with critics of President Duterte, says he will speak to defend the controversial leader when necessary but will use only diplomatic language.

The Commission on Appointments (CA) confirmed the nomination of Cayetano as foreign secretary on Wednesday in record speed—less than five minutes.

Cayetano had not yet sat down for the hearing when House Majority Leader Rodolfo Albano III recommended his nomination to the CA plenary, noting that no one had opposed the senator’s appointment to the Department of Foreign Affairs (DFA).

Sen. Panfilo Lacson, chair of the CA foreign affairs committee, approved Albano’s recommendation when no objection came from members of the panel.

And to match the swiftness of Cayetano’s confirmation, Lacson later delivered the shortest sponsorship speech for Cayetano during the plenary.

“I am humbled. I thank God for this opportunity. I thank the commission and will use this swift, painless confirmation as a reminder for me that I have to do my best,” Cayetano told reporters.

Welcome to the Cabinet

“Secretary Cayetano’s experience and legal acumen [will] enrich the leadership of the Department of Foreign Affairs and promote and enhance our international relations with the countries of the world,” presidential spokesperson Ernesto Abella said in a statement.

Abella also extolled Cayetano’s accomplishments as lawmaker, including his authorship and sponsorship of legislation to extend the validity of Philippine passports to 10 years and the resolutions concurring in the ratification or accession to the Articles of Agreement of the Asian Infrastructure Investment Bank, the Philippine-Japan Agreement on Social Security and the Paris Agreement on Climate Change.

Cayetano, Mr. Duterte’s defeated vice presidential running mate in last year’s elections, will take over the DFA from veteran diplomat Enrique Manalo, who had been designated acting secretary after the CA rejected the nomination of Perfecto Yasay in March.

The 46-year-old Cayetano, who spent nine years as a congressman and 10 years as a senator, said he now had a new rule for himself: speak only on matters pertaining to policy issues or controversies.

Before he faced the CA, Cayetano told reporters he would shy away from “microphone or megaphone diplomacy.”

Asked whether he planned to continue to defend Mr. Duterte or speak against critics of the President, he said: “Definitely the conversion from politician to diplomat or public servant in general to statesman has to be there.”

But part of being foreign secretary is “explaining what’s happening to the country, explaining the vision of the President,” he said.

He said this meant he would be using “a more diplomatic language,” citing as an example the way he had made his presentation of the country’s human rights situation under the Duterte administration at the UN Human Rights Council in Geneva last week.

Cayetano said he was able to convey to the UN forum “what the President want[ed] to say.”

He said he had started to talk to human rights advocates, as he was “willing to work with everyone to improve our human rights record.”

Among his priorities as head of the DFA is to meet with the top brass there to have policy briefings as well as to “align” Mr. Duterte’s “friends to all, enemies to none” foreign policy, he said.

“Meaning, how we can make better our relationship with new friends and how to repair relationships from old allies that may have been damaged,” Cayetano said.

He said Mr. Duterte had given instructions that any nation that wanted to help the Philippines was free to do so but  the government would not accept help or aid from any nation that offered it with “strings attached,” such as a halt to the war on drugs.

On the South China Sea territorial disputes, Cayetano said he would use an “objective-based” approach to the controversies.

“When I [say] objective-based, our objective is how to first start talking and second, how to manage situations and eventually whether in this generation or future generations every inch of our national territory would be more secure,” he said.

After his confirmation, Cayetano took the Senate floor to say goodbye to his colleagues and thank them for making him “a better person and legislator.”

He also apologized to the senators who he said he might have hurt in doing his legislative work.

Cayetano had very public spats with Senators Antonio Trillanes IV and Leila de Lima in defending Mr. Duterte against allegations of extrajudicial killings in the war on drugs. —WITH A REPORT FROM LEILA B. SALAVERRIA