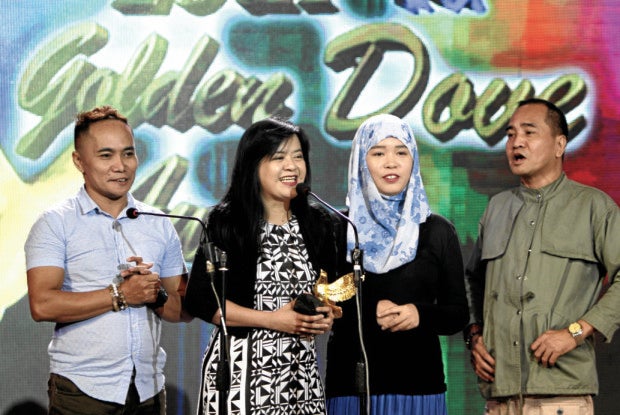 Radyo Inquirer began operating in 2010 under Trans-Radio Broadcasting Corp. (TRBC), but it was only now that the station got a nomination from KBP and won the Golden Dove Award.

“Change in our country came a year ago, but in the case of Trans-Radio Broadcasting Corp., the change came two years earlier,” Radyo Inquirer news director Arlyn dela Cruz said as she received the recognition at the awarding ceremonies at Star Theater in Pasay City.

It was in May 2015 that Dela Cruz was appointed news director, and Jake Maderazo was named station manager.

However, the team, led by Maderazo, agreed that Radyo Inquirer would continue broadcasting not just to merely survive but to become a credible media organization on a multimedia platform.

Radyo Inquirer expanded through the years, putting up a website, a mobile application, social media accounts and Digital Terrestrial Television through Beam Channel.

“We did not give up on our dreams. We decided to continue and when it was very clear with everyone where we wanted to go, we acted as one team under the very able and inspiring leadership of Jake Maderazo,” Dela Cruz said.

According to her, Maderazo is one of the moving forces in the many exciting things on Radyo Inquirer, which is now also on DTT as Inquirer 990 TV.

Maderazo noted that dzIQ focused on real-feel and authentic journalism. “Supported by a revitalized news crew and anchors, the industry grasped our idea of trying to dish out a  ‘better,’ noninvasive, and real no-nonsense social story.”

He said Radyo Inquirer was “a very small player against the superloaded broadcast giants.”

Thus, he said, “Our best station win is sweetest because it is outside of the magic four lowest frequencies.”

TRBC president Paolo Prieto was delighted at the KBP recognition of the station.

“I’m so happy with the award given to us,” Prieto said.

He acknowledged the support of listeners, advertisers and the entire Radyo Inquirer team that accepted the challenge of breaking away from traditions and comfort zones.