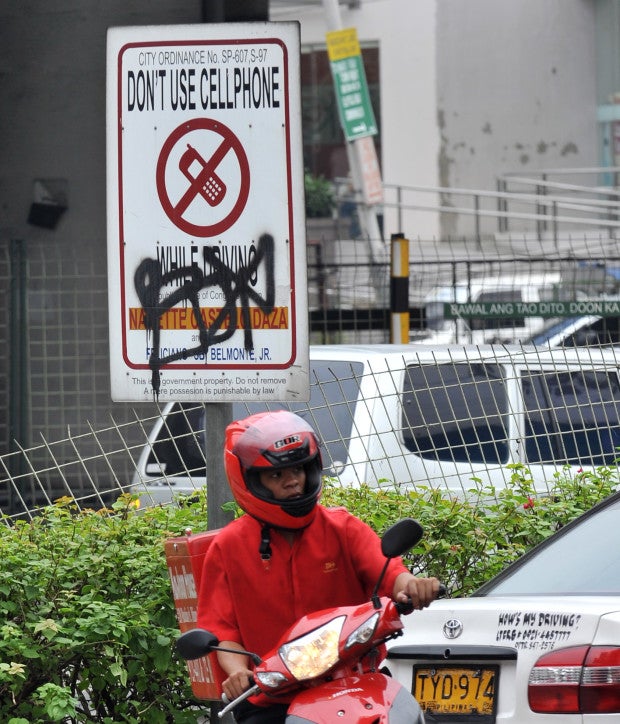 A delivery man speeds past a traffic sign warning motorists against using their mobile phone while driving, displayed on a sidewalk in Manila on January 12, 2011. AFP PHOTO / TED ALJIBE

Motorists who will be apprehend for using electronic gadgets on the road while driving will be slapped with penalties starting on Thursday, May 18, as authorities implement the Anti-Distracted Driving Act or Republic Act 10913.

The law prohibits drivers of all public and private vehicles, including those with diplomatic plates, from using any communication device or other electronic entertainment and computing gadget “while vehicles are in motion or temporarily stopped on a traffic light or an intersection.”

But authorities clarified that motorists are allowed to take emergency calls and use traffic and navigational mobile applications like Waze and Google Maps. The law, however, advised drivers to set their destination on the said applications before their departure.

It added that the use of hands-free devices like microphones, earphones and other applications are allowed “as long as these do not interfere with the driver’s line of sight.”

“This means that no communication or electronic gadget should be affixed on the car’s dashboard and steering wheel. In addition, drivers are only allowed to wear earphones when making or receiving calls. Using earphones to listen to music falls under ‘similar acts’ in Section 4B of the law, in addition to reckless driving violation penalized under other relevant laws,” the guidelines read.

Authorities also warned drivers of private vehicles with heavily tinted windshields that the law will be strictly enforced on the ground with the help of high-definition cameras that can detect lights from devices inside the vehicles.

The Land Transportation Office under the Department of Transportation is the lead implementing agency of the law. It has the authority to tap members of the Philippine National Police, Metropolitan Manila Development Authority, and local government units to carry out enforcement. JE

Read Next
400 soldiers pulled out of Sulu, deployed in Davao City
EDITORS' PICK
The crisis within: Suicides rise as COVID takes its toll on lives, livelihood
DOTr to defend proposal to increase passenger capacity in public transport
Legarda emphasizes role of ICC/IPs in nation building this IP month
Work-From-Home is here to stay and requires reliable logistics
Pharmally scandal: When middlemen profit even during a pandemic
USAID Opportunity 2.0 calls for applicants for grants for out-of-school youth engagement
MOST READ
Martires asks why he is being singled out over issues on releasing SALNs
PDP-Laban’s Cusi wing inks coalition deal with Reform Party
Robredo to supporters: ‘Pink’ must also be experienced, help others
Isko to critics after remarks vs Robredo: I’m sorry, this isn’t about Mr. Congeniality
Don't miss out on the latest news and information.