Ombudsman: No to Napoles as state witness | Inquirer News

Ombudsman: No to Napoles as state witness 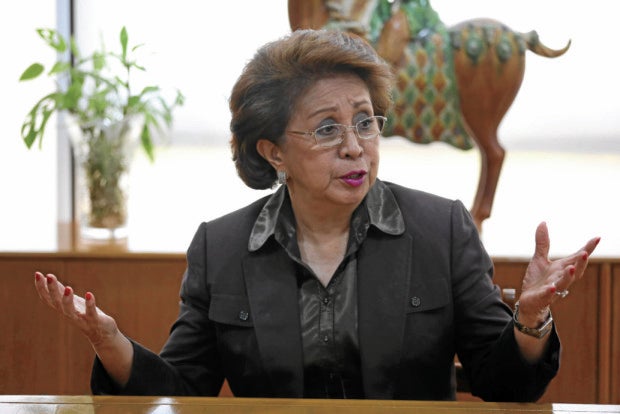 The Office of the Ombudsman and the Department of Justice (DOJ) are on a collision course over whether the alleged pork barrel scam mastermind, Janet Lim-Napoles, could be turned into a state witness.

Morales said her office had the “last say” on the prosecution of pork barrel scam cases, stressing that it was “not bound by the findings” of the DOJ.

“As far as the prosecution is concerned, she [Napoles] is one of the alleged principal malefactors. Certainly, the OSP (Office of the Special Prosecutor) will block any attempt to make her a state witness,” she said in an interview on the agency’s 29th anniversary.

“We don’t find [Napoles] to be a candidate for being state witness,” she said.

“It is the right of anybody to do anything as long as it is not against the law,” Aguirre said in a text message to reporters.

Aguirre maintained that the DOJ had the “exclusive right” to place any individual on its Witness Protection Program even without a case being filed.

Malacañang’s interest in revisiting the P10-billion scam involving the Priority Development Assistance Fund (PDAF) allocations of senators and congressmen has been rekindled after Aguirre said the DOJ might use Napoles as a key witness in a new inquiry.

Napoles offered to turn state witness following her acquittal by the Court of Appeals in the illegal detention case of pork barrel whistle-blower Benhur Luy.

She remains detained, though, as she is charged with plunder, a nonbailable offense, in the Sandiganbayan with her coaccused—former Senators Juan Ponce Enrile, Jinggoy Estrada and Bong Revilla.

Aguirre said last week that he might form a panel of state prosecutors to lead the reinvestigation of the pork barrel scam in which funds were coursed through foundations set up by Napoles in exchange for senators and congressmen pocketing up to 50 percent of the funds.

Napoles and her foundations also took hefty cuts of the lawmakers’ PDAF allocations, which were meant to help ease poverty in the country.

As the constitutional body mandated to prosecute corruption cases in the Sandiganbayan, the Office of the Ombudsman, not the DOJ, has the “last say” on whether Napoles will be recommended as state witness.

Morales said she was “not bothered” by the “exploratory talks” that Aguirre was holding with Napoles’ lawyers. “We are confident of our position,” she said.

She said the DOJ had the discretion to conduct a reinvestigation of the pork barrel scam.

Even then, Morales said she “did not know what the DOJ wants to reinvestigate” and if this included cases already probed by the Ombudsman or filed in the Sandiganbayan.

“It’s up to them if they wish to reinvestigate. But, as I said, we are not bound by any findings over cases which the Ombudsman has the final authority to determine whether or not there is probable cause,” she said.

Malacañang said on Friday that President Duterte “wants the truth to finally come out and hold those involved, regardless of political color or party line, accountable.”

Recent Palace statements indicated that the reinvestigation would zero in on high-ranking officials overlooked by the Aquino administration.

Stephen David, Napoles’ lawyer, said his client was ready to name other senior public officials involved in the pork barrel scandal. He, however, said Napoles should be afforded security by the DOJ as state witness.

For her part, Morales said: “I don’t know about those alleged perpetrators who were overlooked by the Office of the Ombudsman, because our office is continuing its investigations against those possible persons who were involved in the PDAF controversy.”

She said Florencio Abad, budget secretary in the Aquino administration, was still being probed by her office.

Aguirre said it would be best for the appropriate court to settle questions about the authority of the DOJ and the Ombudsman to discharge an accused as a witness.

Section 17, Rule 119, of the Revised Rules of Criminal Procedure states that “when two or more persons are jointly charged with the commission of any offense, upon motion of the prosecution before resting its case, the court may direct one or more of the accused to be discharged with their consent so that they may be witnesses for the state.”

Under the law, only the Ombudsman’s Office of the Special Prosecutor is authorized to prosecute cases being heard by the Sandiganbayan, such as plunder, graft and malversation.