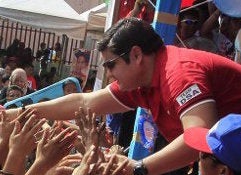 MANILA — The Sandiganbayan Sixth Division has issued arrest warrants against former Maguindanao officer-in-charge governor Datu Sajid Islam Ampatuan and six others over the release of P72.26 million to allegedly nonexistent lumber companies in 2009.

This was after the anti-graft court found probable cause to proceed with 145 of the 197 corruption charges filed against Ampatuan over the past two months.

“After perusing the Information and evaluating the resolution of the Prosecutor, the evidence in support thereof, and the records of the preliminary investigation attached thereto, the Court finds that sufficient grounds exist for the finding of probable cause for the purpose of issuing warrants of arrest against the accused charges in the instant cases,” the court said.

The court still called for the arrest of provincial engineer Landap Guinaid, whom Ombudsman prosecutors still charged despite being killed last July 28 in an ambush in the provincial capital of Shariff Aguak.

Ampatuan’s lawyer Gregorio Marquez said his client in Maguindanao, as of Tuesday, and would soon post the bail of P3.568 million to secure temporary freedom for 137 counts of falsification and four counts each of graft and malversation.

Asked about Ampatuan’s sentiments, Marquez said: “That was the time when the yellows were in power. This was a political persecution to the Ampatuan family who were the strongest allies in Mindanao of GMA [former President Gloria Macapagal-Arroyo].”

“Look [at] all the Ampatuan [who]  were herded by [Senator Leila] de Lima in the murder case [and] then graft cases. Now, look who is now in jail and who are now being indicted too,” he added. “They got their own dose of medicine as well.”

“Anyway, we can refute and  the charges and prove their innocence,” Marquez concluded.

Besides the 137 charges at the Sixth Division, Ampatuan also faces two more sets of corruption cases at the Fifth Division over various anomalies between February and September 2009, months before the Maguindanao Massacre.

Sixteen of the charges involved the alleged fabrication of accomplishment reports for eight infrastructure projects valued at P23.36 million.

After the statements of work accomplished were approved, the province then awarded P22.37-million worth of contracts to a gas station owned by Ampatuan’s brother Datu Andal Ampatuan Jr. These contracts for the supply of fuel and lubricants allegedly did not go through public bidding.

Another batch of 36 charges involved the release of P16.32 million to a food supplier, Henry Merchandising, which turned out to be “fictitious and/or nonexistent.”

He is out of detention on an P11.6-million bond because evidence against him was not strong enough to deny him the right to bail. He tried to run for mayor of the provincial capital of Shariff Aguak in May 2016, but lost.  SFM