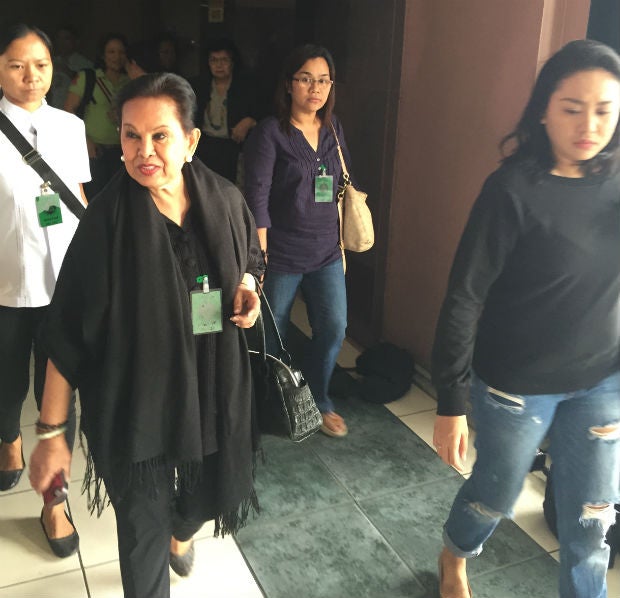 Elenita Binay arrives at the Sandiganbayan for a hearing . (INQUIRER.net FILE PHOTO/NESTOR CORRALES)

MANILA — The Sandiganbayan Fifth Division has denied the appeal of state prosecutors on former Makati City Mayor Elenita Binay’s graft acquittal over a P21.7-million supply deal for furniture in the city hall in 2000.

In a five-page minute resolution dated May 8, the Fifth Division said it could not reverse the Oct. 28 decision that granted Binay’s demurrer to the evidence. The ruling amounts to an acquittal on the ground of insufficient prosecution evidence.

“Generally, any further prosecution of the accused after an acquittal would violate the constitutional proscription on double jeopardy,” read the resolution signed by Justices Rafael R. Lagos, Ma. Theresa Dolores C. Gomez-Estoesta, and Geraldine Faith A. Econg.

Interestingly, Gomez-Estoesta and Econg dissented from the October decision to grant the demurrer, under the opinion that prosecution evidence was enough to sustain the continuation of trial.

Back then, they were outnumbered by three other magistrates: now-retired Justices Roland B. Jurado and Jose R. Hernandez and now-Supreme Court Justice Samuel B. Martires.

Yet, the court found that “a consideration of the present motion… has already tied the hands of this Court.” It noted that a reexamination of the value and weight of prosecution evidence would result in double jeopardy.

The decision could no longer be appealed, and could only be reviewed  by the Supreme Court through a petition for certiorari, the resolution
said.

According to the October decision, prosecutors failed to establish the supposed conspiracy to rig the bidding in favor of supplier Asia Concept International, Inc., and failed to prove that the bidding led to overpricing of P2.78 million and excessive purchases worth P5.91
million.

In another development, the anti-graft court’s Third Division on Tuesday postponed the beginning of Binay’s graft and malversation trial over the purchase of P45-million worth of hospital beds and sterilizers in 2000 and 2001.

This was in order to give the Supreme Court a 10-day period to decide whether to issue a temporary restraining order on the trial, as provided for by Section 7, Rule 65 of the Rules of Court.

Binay’s camp only filed on Tuesday a petition for the high court to reverse the graft court’s denial of her motion for the inhibition of Presiding Justice Amparo M. Cabotaje-Tang and the re-raffle of her four criminal cases to separate divisions.

“If after a period of 10 days, no temporary restraining order is issued by the Supreme Court, the Court will proceed with the case,” Tang said in an open court hearing.

Should Binay fail to secure the stay order, the trial will begin on June 20.

The one-term mayor’s trial was supposed to have begun on Oct. 13, but it had to be repeatedly delayed after her camp sought the reraffle of her cases to different divisions. The move came at the eleventh hour especially as pretrial proceedings have been concluded already.

Binay said separate court divisions should handle her four criminal cases regarding Ospital ng Makati to avoid prejudgment by creating an “impression” that these formed a “pattern” of procurement irregularities.

In November, she asked Tang to recuse from her cases after she asked questions that allegedly gave an “appearance of bias and prejudice.” To recall, Tang asked Binay’s lawyer in an October hearing if her camp was “somehow casting aspersion on the impartiality of this Court.”

The court in its Jan. 13 resolution denied both of Binay’s motions, saying that “perceptions of bias from the mere tenor and language of a judge” was not enough basis to show prejudgment on Tang’s part.

It also affirmed the validity of holding a joint trial, citing that the case raffle committee opted to consolidate the cases because they “arose from the incident or series of incidents or they involve common questions of fact and/or law.”

It also reasoned out that consolidation of the cases would benefit both Binay and the prosecution because the latter would present almost the same witnesses and documents for the four cases.  SFM/rga