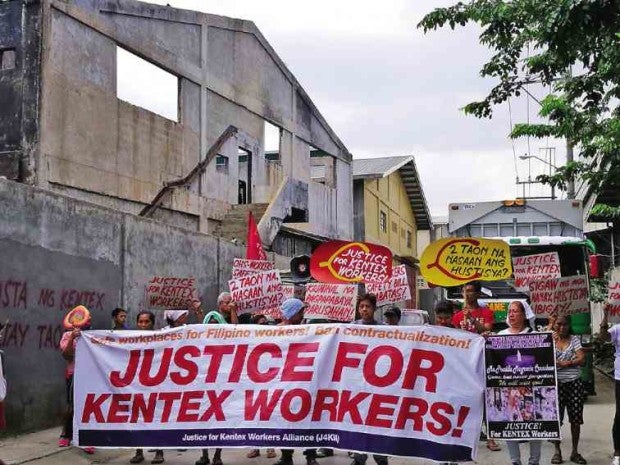 Families who lost a member in the 2015 Kentex factory fire in Valenzuela City, along with survivors and a workplace safety NGO, return to the site of the tragedy to call on President Duterte to help them get justice. —contributed photo

More than two years after over 70 workers were killed in the Kentex slipper factory fire in Valenzuela City, justice remains elusive for their families and other employees who survived.

On Saturday, exactly two years after the deadly May 13, 2015 blaze, the victims’ families, survivors and members of a workplace safety nongovernment organization, the Institute for Occupational Health and Safety Development (IOHSAD), held a memorial program in front of the factory’s gates.

“The country still has not learned lessons from the Kentex fire two years after this tragedy. The factory’s capitalists continue to evade accountability. Worse, unsafe and precarious working conditions are still prevalent in sweatshops all over the country,” IOHSAD advocacy officer Nadia de Leon said.

The group called for the immediate passage of Senate Bill No. 1317 or the Occupational Health and Safety Standards Act (OSH) which was filed last February, a few weeks after another huge fire razed the HTI factory inside the Cavite Export Processing Zone. The counterpart bill in the House of Representatives, House Bill No. 64, was passed in December 2016.

The consolidated bill on occupational health and safety bans self-assessment as a form of labor standard inspection while imposing stiffer penalties on violators of workplace safety and health.

“The fight for justice and safe workplaces continues. We are glad that the Senate has included the OSH bill in its priority list,” De Leon said.