By yearend, expect no commuters lining up at Metro Rail Transit (MRT ) 3 stations, an official told a Senate hearing on Monday.

Engineer Deo Leo Manalo, director for operations of MRT 3, gave this assurance during the hearing of the Senate committee on public services chaired by Senator Grace Poe.

“By the end of the year, you’re guaranteeing that mawawala ‘yung pila (the lines will be gone)?” Drilon asked again. 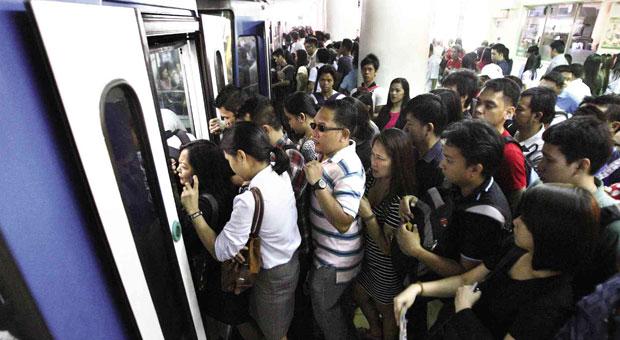 The MRT 3 official said that the 23 trains that are currently operating can carry about 500,000 passengers a day. But by 2018, he said, more trains will be added and the number of riders would increase to 700,000.

In 2019, Manalo said they expect to have “more efficient operation” and the trains could carry about 800,000 passengers a day.

“So right now, these are all up in the air and are wish list because for now, we still have the signaling system to test to make sure there’s no feedback,” she said.

Poe then asked if the projected additional 300,000 passengers in 2019 would mean less people lining at MRT stations.

But the MRT 3 official revised his answer when Drilon directly asked when the long lines of commuters would totally disappear. IDL/rga

Read Next
China wins praise for Silk Road but concerns persist
EDITORS' PICK
Nestlé Philippines’ ‘NESCAFÉ Plan’ bags Grand Anvil at PRSP 56th Anvil Awards
Smart reinforces superiority with best speed and mobile video experience in PH
Every Filipino home can now be a smart home with realme TechLife
New 3,045 COVID-19 cases push PH total active cases to 40,074
LTO’s P500-M deal for screws draws scrutiny
How to lose a PH genius: Wesley So officially a US citizen
MOST READ
US lays out list of aid to ‘satisfy’ Duterte following VFA payment demand
How to lose a Filipino genius: Wesley So officially a US citizen
Robredo on Sara Duterte leading poll surveys: Why are Filipinos drawn to leadership of this kind?
Kris Aquino dispels rumors on son Josh getting married, thanks Ogie Diaz for defending him
Don't miss out on the latest news and information.