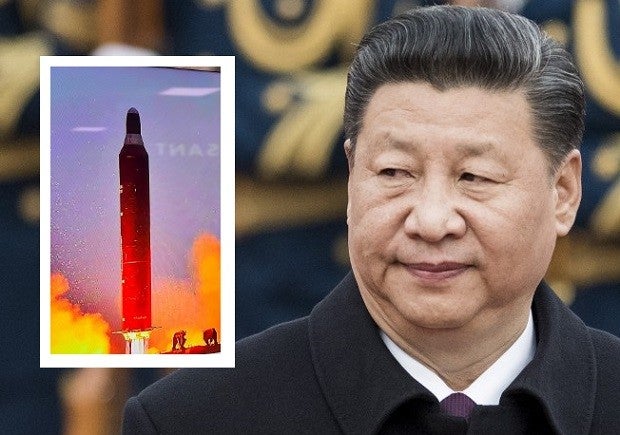 North Korea fired a missile from a region near its border with China as Chinese President Xi Jinping hosted a summit for his Silk Road initiative, attended by several foreign leaders and delegates. The launch was an ’embarrassment’ for Xi and China, an analyst said. AFP

BEIJING, China — China opened on Sunday a summit to promote an ambitious global trade infrastructure project highlighting its growing leadership on globalization, but a North Korean missile test threatened to overshadow the event.

President Xi Jinping was preparing to host leaders from 29 nations for the two-day summit in Beijing when US and South Korean military officials confirmed that Pyongyang had launched a missile, whose characteristics were not immediately known.

Delegations from North Korea and the United States were expected at the forum, though not their leaders. Few Western heads of government made the trip.

The summit is showcasing Xi’s cherished One Belt, One Road initiative, a revival of the Silk Road that could cement China’s growing global clout on trade and geopolitics.

Xi hailed the initiative as “a project of the century” in a “world fraught with challenges”.

The Chinese-bankrolled project seeks to link the country with Africa, Asia and Europe through an enormous network of ports, railways, roads and industrial parks.

The initiative spans some 65 countries representing 60 percent of the world population and around a third of global gross domestic product. The China Development Bank has earmarked $890 billion for some 900 projects.

Xi did not address the North Korean missile launch at the start of the summit, but Beijing has warned its communist ally in recent months to avoid any new missile or nuclear tests.

North Korea relies heavily on trade with China for its economic survival, and US President Donald Trump has urged Xi to use that leverage to put pressure on Pyongyang.

“This will not overshadow (the summit) in an enormous way but it will absolutely continue to raise US frustrations with Beijing,” he said.

Balding said the US was “frustrated” that North Korea was also invited to the summit.

Xi focused his speech on his initiative, boasting that it represented a “road for peace” and a way to “forge partnerships of friendship rather than alliance”.

But he cautioned “all countries should respect each others’ sovereignty… and territorial integrity”.

Xi has defended globalization at a time when Trump has vowed to put “America First” when it comes to international trade and relations.

Belt and Road is seen as a practical solution to relieve China’s industrial overcapacity. But it could also serve Beijing’s geopolitical ambitions.

“In my view, Belt and Road is intended to create greater economic interdependence between China and its neighbors, which Beijing hopes will translate into increased political influence,” said Bonnie Glaser, director of the China Power Project at the Washington-based Center for Strategic and International Studies.

Some Belt and Road projects are raising concerns in certain countries.

India has voiced displeasure at the China-Pakistan Economic Corridor, a Belt and Road project aimed at linking northwestern China to the Arabian Sea.

The route cuts through Gilgit and Baltistan in Pakistan-administered Kashmir, disputed territory that India claims is illegally occupied.

Human Rights Watch raised concerns on Saturday about the treatment of people along the new Silk Road route in Central Asian nations with poor track records in infrastructure projects.

The US-based organization said Chinese authorities have “heightened surveillance and repression to prevent potential unrest that could impede” Belt and Road plans in the western Xinjiang region. CBB/rga