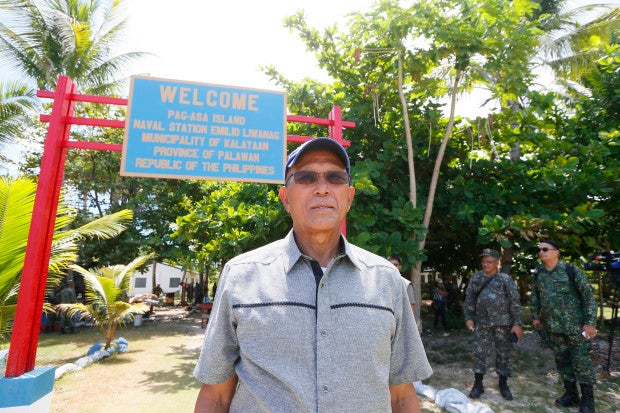 Philippine Defense Secretary Delfin Lorenzana tours the Philippine-claimed Pag-asa (Thitu) Island during his visit to the Spratlys Group of islands off the disputed South China Sea in western Philippines Friday, April 21, 2017. The visit Friday was aimed to assert the country’s claim to the heartland of a disputed area where China is believed to have added missiles on man-made islands. The South China Sea issue is expected to be discussed in the 20th ASEAN Summit of Leaders next week.(Photo by BULLIT MARQUEZ / AP)

The Philippine Navy has started the delivery of construction supplies to Pagasa Island in the West Philippine Sea (South China Sea) for the much-needed improvement of facilities to start.

Lt. Gen. Raul de Rosario, Western Command chief, said on Thursday that they have started to move in some construction materials and troops for the repairs but the bulk of the supplies have yet to be delivered.

The supplies and the troops were brought to the island by a ship, he added.

Last April, Defense Secretary Delfin Lorenzana, along with top military officials, visited the island, the biggest of the Philippine claims in the Spratlys (Kalayaan) Island Group. He promised to make it a tourist destination and announced that construction would hopefully start before the rainy season begins in July.

But last week, he said that the projects might take some time to begin as some contracts had to be renegotiated.

The government is prioritizing the building of a beaching ramp first so that construction materials for the rehabilitation of other facilities could be delivered by ships.

On Wednesday, Vice Adm. Ronald Joseph Mercado, Navy chief, said they were focusing on planning of the projects and the delivery of materials.

“The timeline just for the delivery is during before the rainy season so that the sea conditions will not be rough when we deliver our materials and equipment in Pagasa,” he said.

“But as to the construction, we are not putting any timeline. Our focus right now is to deliver the materials and equipment,” he added. /atm