Pope to canonize 2 Fatima children a century after visions 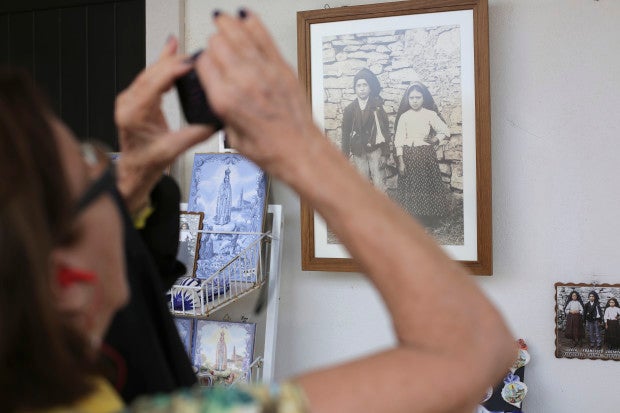 In this photo taken May 4 2017, a shop selling souvenirs displays a photo of Francisco and Jacinta Marto near the house where they lived in the village of Aljustrel, outside Fatima, Portugal. Pope Francis is visiting the Fatima shrine on May 12 and 13 to canonize Francisco and Jacinta Marto, two Portuguese shepherd children who say they saw visions of the Virgin Mary 100 years ago. AP

FATIMA, Portugal — Three shepherd children in Portugal were jailed and threatened with being boiled alive in olive oil when they claimed the Virgin Mary appeared to them 100 years ago. The Catholic Church doubted their story too.

From that unpromising start, the children’s reported visions would go on to strengthen the faith of Portugal’s persecuted Catholics and make the small farming town of Fatima one of the world’s foremost pilgrimage sites, with around 6 million visitors a year.

Now, the Portuguese youngsters’ long-ago testimony is giving the Catholic Church its youngest saints who did not die as martyrs. Pope Francis plans to observe the centenary of their visions by canonizing Francisco and Jacinta Marto this weekend when he makes his first pilgrimage to Fatima.

During the Friday-Saturday visit, Francis will also likely seek to make Fatima’s message of peace and prayer resonate today, church officials say. According to church lore, the Virgin Mary urged penance, sacrifice, and turning away from sin during her appearances to the children.

“At Fatima, the pope could make an appeal to humanity that ‘If you don’t change your criteria, be it political or economic, the world will suffer,'” said Monsignor Carlos Azevedo, who led the church commission that compiled the 15 volumes of documentation about the Fatima phenomenon.

Jacinta was 7 years old and Francisco 9 when they first witnessed the apparitions on May 13, 1917 along with their 10-year-old cousin, Lucia dos Santos. While the Marto siblings died two years later during the Spanish flu pandemic, Lucia became a Carmelite nun and died in 2005. Efforts are underway to beatify her, too, but couldn’t begin until after she died.

According to Dos Santos’ written accounts, the Virgin appeared to the three children six times in 1917 in a field near Fatima where they grazed their sheep. The visits culminated in October with the “Miracle of the Sun,” when others in Fatima at the time reported seeing the sun spinning in the sky. For believers, it was proof that the apparitions were authentic.

Three months after the first reported vision, with news of their claims spreading through word of mouth, local administrative officials placed the children in separate cells and attempted over three days to coerce them into recanting. They were told they would be fried in olive oil if they continued with their lies.

But the children held firm.

“Authorities said it was a prank,” said Francisco Marto, 78, whose father was Jacinta and Francisco’s older brother.

Cardinal Jose Saraiva Martins, the retired head of the Vatican’s saint-making office, said the children’s steadfast faith and refusal to disavow their visions made them worthy of sainthood. Himself Portuguese, Saraiva Martins pushed through the Martos’ beatification in 2000 and will travel with the pope to Fatima to see them canonized.

“Before, we couldn’t even talk about the beatification of children in the history of the church because the principle prevailed that they didn’t yet have the skills to exercise the heroic level of Christian virtues,” required as a first step, Saraiva Martins said in an interview.

Portuguese history helps explain the authorities’ initial hostile reaction to the children’s story. The country was proclaimed a republic after the 1910 assassination of King Carlos I, and the first republican governments in Lisbon were determined to curb the Catholic Church’s influence. Religious teaching at schools was banned, and many bishops went into exile.

Portugal also had entered World War I in 1916. Food shortages brought widespread hardship, and people hungered for spiritual sustenance. The Fatima apparitions coincided with that need.

“It was a strong moment of an eruption of the supernatural, in that difficult moment,” said Azevedo, now a Vatican official.

The Virgin purportedly revealed three secrets to the children, containing apocalyptic warnings that seemed to foreshadow World War II and the rise of communism. The contents of the secrets went undisclosed for many years — the third secret wasn’t revealed until 2000. The mystery furthered Fatima’s appeal even as the government tried to curb its popularity.

In 1921, with crowds numbering in the tens of thousands turning up on apparition anniversaries, the government tried in vain to outlaw large-scale religious gatherings. After the church recognized the apparitions as authentic in 1930, people flocked in greater numbers to the site.

Eventually, church-friendly governments assumed power, the anti-clerical laws were rescinded and Portugal re-emerged as the mostly Catholic country that it is today.

Francisco, the 78-year-old nephew of the future saints, runs a souvenir store across the road from the tiny stone house where the Marto family lived in the secluded village of Aljustrel, about 2 kilometers (1 mile) outside Fatima. He remembers his grandfather sitting on the stone stoop and telling stories about his children to pilgrims visiting the shrine.

The old family house is well-preserved, with dry-stone walls, bare timber roofs, small windows and ill-fitting wooden doors. Some of the nine Marto children — Francisco and Jacinta had seven siblings — had to sleep in the barn with the farm animals. Only four would make it to adulthood.

The children’s parents didn’t seek out celebrity and were reluctant centers of attention. Lucia’s parents complained that pilgrims trampled their crops.

“Life didn’t change much. They kept on farming,” Francisco said. His father, though, did get a construction job at the Fatima basilica where the three seers are entombed.

The shrine, with its basilica overlooking a vast square, is now the economic lifeblood of this otherwise unremarkable town. Stores selling souvenirs — statues of the Virgin Mary, rosaries, even wax limbs — line the streets while hotels, restaurants and cafes rely on a steady parade of tourists and pilgrims, 1 million of whom are expected for Francis’ two-day visit. Many come to toss wax limbs into a huge fire pit as they pray for healings. The shrine’s Church of the Holy Trinity, dedicated in 2007, can seat 8,633 people.

“Everyone used to be poor and humble” in the town, said Antonio Vieira, 79 and another nephew of the new saints. “Who’d have guessed that Fatima would turn out like this?” CBB/rga