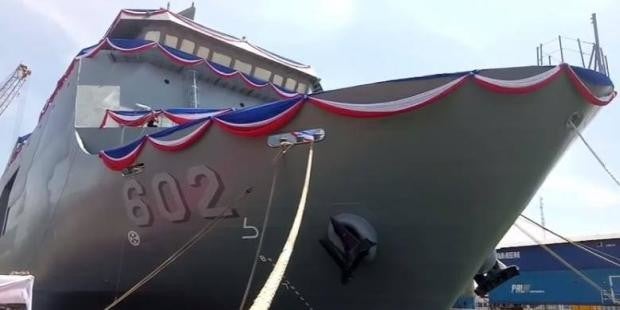 The BRP Davao del Sur at the South Harbor in Manila. (Photo from the Facebook page of the AFP)

The Philippine Navy will celebrate its 119th anniversary with the commissioning of its brand new landing dock vessel, the BRP Davao del Sur (LD-602).

With the capabilities of the strategic sealift vessel, it is likely to be used for humanitarian assistance and disaster response operations.

“It can work in tandem with BRP Tarlac or alternate vessel if one is in maintenance,” Philippine Fleet Commander Rear Admiral Gaudencio Collado Jr. said on the sidelines of the welcome ceremonies for BRP Davao del Sur.

“With this we can have the assurance that if there is calamity, although we are not asking for that, we have something to use for HADR,” he said.

For instance, had there been this type of vessel during Super Typhoon Yolanda (Haiyan) in 2013, much-needed aid would have reached Eastern Samar in a day or even less.

Asked if the new ship would perform territorial defense duties like BRP Tarlac, Collado said they would wait for a directive from the higher headquarters.

The arrival of BRP Davao del Sur marks a “milestone” for the Navy, according to the Philippine Fleet commander.

“Davao del Sur, like BRP Tarlac, illustrates the perseverance of our government to build up capability of our Navy…Her timely arrival gives us more reasons to celebrate another year of honorable service to our country and people. I take pride in saying that the Navy is on its way to becoming strong better and credible naval force that our maritime nation can be truly be proud of,” Collado said.

The new vessel has a minimum operating range of 7,500 nautical miles. It is about 120 meters long and has a maximum carrying capacity of 11,583 tons.

The ship can carry 500 troops, two landing craft units, three helicopters and two rigid-hull inflatable boats. It can also stay for a month at sea.

The two strategic sealift vessels, now the biggest ships of the Philippine Navy, were acquired from PT PAL in Indonesia for P4 billion. CBB/rga