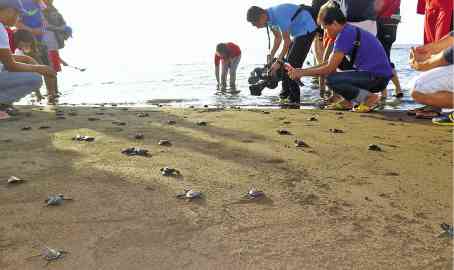 Sea turtles hatched on the beaches of Sariaya town in Quezon province are released into the Tayabas Bay. —DELFIN T. MALLARI JR.

LUCENA CITY—Environmentalists have asked officials in Sariaya town in Quezon province to declare areas in the municipality as “protected nesting sites” for endangered sea turtles which lay eggs on their shoreline along the Tayabas Bay every year.

“We’re more than willing to formally adopt all suggested programs and courses of action to help protect our natural environment, particularly the annual exodus of sea turtles to our shores,” Sariaya Vice Mayor Alex Tolentino said in a recent interview.

Once declared a protected site, the place will be protected against sand quarrying, mangrove and beach forest cutting, coral poaching and all other forms of environmentally destructive activities.

According to Zeny Bernal, Tanggol Kalikasan (TK) Southern Luzon program director, the coastal villages of Castañas, San Roque, Guisguis and Bignay 2 are known nesting sites of green sea, olive ridley and hawksbill turtle species that return to the beach from October to December and stay there for 58 days for the nesting
season.

The species are considered endangered by the International Union for Conservation of Nature and Natural Resources and the Convention on International Trade in Endangered Species of Wild Fauna and Flora.

Republic Act No. 9147 (Philippine Wildlife Resources Conservation and Protection Act) prohibits the hunting, selling and killing, as well as collecting of the eggs, of endangered species.

Sariaya, which hosts beach resorts along the stretch of the province’s ecotourism highway, has become a haven of sea turtles and a model of public-private partnership for environmental protection.

According to Bernal, TK has been conducting an information campaign to help educate the public on existing laws on environmental and wildlife protection.

She said some residents along the coast of Tayabas Bay in Quezon still kept sea turtles as pets.