NPA not yet pinned on Banga arson in Aklan – police 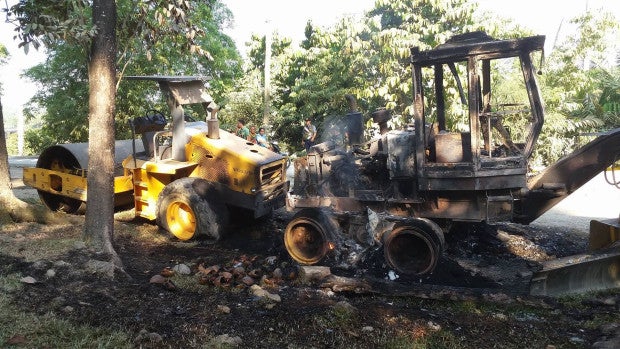 A grader and road roller were burned by unidentified men in Banga town, Aklan, early May 2, 2017. (Photo contributed by Rodnel Aguirre to Inquirer Visayas)

ILOILO CITY — Police have admitted they are still in the process of determining those behind, and the motive for last week’s burning of two pieces of heavy equipment in Banga town in Aklan.

Senior Insp. Joey de los Santos, Banga police chief, said they could not confirm yet if New People’s Army (NPA) rebels were responsible for the attack.

The NPA in Panay has not issued any statement as of May 9 to own responsibility for the burning of a grader and a road roller along a provincial road at Barangay Daguitan on May 2.

The rebels usually burn equipment of firms who refuse to pay their so-called “revolutionary taxes.”

De Los Santos said they have been pursuing various possible angles including personal grudges in determining the motive and identities of those involved in the burning.

The pieces of equipment, owned by the BSP construction firm, were being used in the construction of a road from Banga to the neighboring towns of Madalag and Libacao.

Residents heard one or two motorcycles stopping near the area where the pieces of heavy equipment were parked before these were burned.

Pieces of wood soaked in a still undetermined substance believed to have been used in the burning were recovered in the area.

But the rebels launched four separate attacks in southern Iloilo from April 30 to May 4.

In a statement, the NPA’s Napoleon Tumagtang Command owned up to the killing of government militiaman Javier Estimo in Barangay Igtubli in Igbaras town on May 4.

They also fired at a detachment of the Philippine Army’s 12th Infantry Battalion in Barangay Pitogo in San Joaquin town and separate detachments in the villages of Igcabugao and Igtalunon in Igbaras town from April 30 to May 2.

No casualties were reported in the gun attacks at the detachments.  SFM