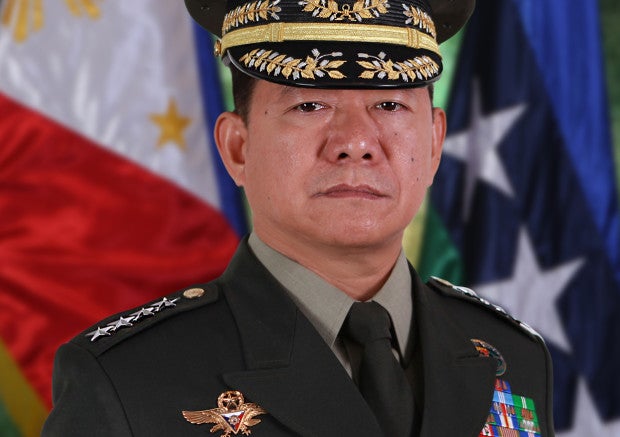 Armed Forces of the Philippines chief of staff Eduardo Año. PHOTO FROM AFP

Duterte made the announcement during his departure speech at the Ninoy Aquino International Airport Terminal 3.

Duterte said that Año, who is set to retire on October 26, will have to finish his term before he assumes his post as secretary of the Department of Interior and Local Government (DILG).

Read Next
Fake lawyer who appeared in court for client nabbed in Cebu
EDITORS' PICK
97% of COVID-19 beds at PGH currently occupied
Gear up and get ready to play with Yamaha Mio Gear
Acer starts the year off strong with the Aspire Vero National Geographic Edition
Japan brings back virus restrictions over Omicron surge
Over 3 Million worth of prizes to be won at Smart Padala’s SENDali Manalo Promo!
Uproar over no vax, no ride policy: Maybe it’s time for gov’t to say sorry—Bello
MOST READ
1Sambayan names 7 aspirants in its 2022 Senate lineup
Emma Stone calls Andrew Garfield a ‘jerk’ after he ‘lied’ about his ‘Spider-Man: No Way Home’ appearance
Guevarra to Acosta: Obey rules on unvaccinated
Commuters affected by ‘no vax, no ride’ policy may file class suit —Lacson
Don't miss out on the latest news and information.