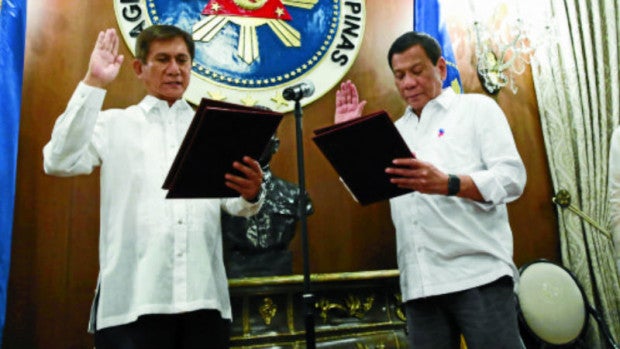 President Duterte is looking to a former Armed Forces chief of staff, Roy Cimatu, to balance the sometimes competing concerns of the head of the Department of Environment and Natural Resources (DENR), Malacañang said on Tuesday.

At the Cabinet meeting on Monday, when Cimatu’s appointment as environment secretary was announced, Mr. Duterte said he felt that Cimatu was extraordinarily gifted for the task of balancing environmental concerns with mining operations, according to presidential spokesperson Ernesto Abella.

“So, I suppose, what the President was saying is basically, what he’s looking for, really, is balance,” Abella added.

Cimatu said on Tuesday that he could allow mining in the country as long as it was done responsibly, taking a more moderate stance than his dismissed predecessor who ordered more than half the country’s mines shut.

“For me, I think we can allow mining [as long as] it’s responsible, it does not destroy the environment, as long as it’s properly handled,” Cimatu said in a radio interview.

Mr. Duterte named Cimatu as a replacement for Gina Lopez, a move welcomed by miners but opposed by environmental groups that claimed Cimatu did not have a track record in protecting natural resources.

Cimatu, who described himself as “moderate and calm,” said that while he did not have enough experience in environmental conservation, he was willing to learn.

He said he would look at mines that Lopez allowed to operate as well as those that were ordered shut in the Philippines, the world’s top nickel ore supplier.

Cimatu, who briefly headed the Armed Forces of the Philippines in 2002, said he wanted to meet Lopez to get her insight on policies.

“I admire her passion and love for the environment. I will be honored to meet her and try to get her insight in protecting the environment,” he said. “I will do my job well for the interest of the Filipino people.”

Lopez earlier said the Philippines was “unfit for mining” because of its unique ecosystem.

Her nomination was rejected by the Commission on Appointments last week.

Give Cimatu a chance

Lopez has asked supporters calling for her reinstatement to give Cimatu a chance and to learn to work together with him.

“I welcome the appointment and look forward to working together with him in the sphere of development. He brings certain abilities to the [DENR], and we can all work together,” she said in a message during a vigil held by environmental groups outside the DENR central office on Monday night.

“No one carries all the qualifications … . I have heard he is a good man and we will give him a chance. After all, he was the one appointed by the President. We should give him a chance,” she told the environmental groups, which included Greenpeace members who chained themselves to the DENR gates, and leftist groups such as Sanlakas that were chanting “Ayaw namin kay Cimatu! (We don’t want Cimatu!)”

The Kalikasan Philippine Network for the Environment has denounced Cimatu’s appointment, stating that “a military man [at] the DENR’s helm would betray the people’s longstanding clamor for social justice and environmental protection.”

The chants turned instead to “Bantayan ang DENR! (Guard the DENR!),” in reference to calls by groups such as Greenpeace to protect the agency from being taken over by business interests.

In a statement, the peasant group Kilusang Magbubukid ng Pilipinas slammed the appointment of Cimatu, citing the alleged human rights violations committed when he was Armed Forces of the Philippines chief of staff. —REPORTS FROM LEILA B. SALAVERRIA, JAYMEE T. GAMIL, CHRISTINE O. AVENDAÑO, JEROME ANING AND THE WIRES