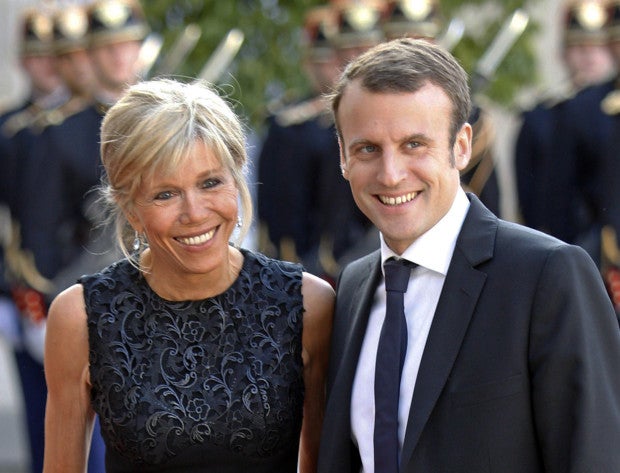 NEW COVER STARS With Barack and Michelle Obama no longer in the White House, Emmanuel and Brigitte Macron are the new cover stars in the corridors of power in France. —AP

PARIS—It is an image that will long live in French political memory.

As incoming President Emmanuel Macron stood in front of his cheering supporters at the Louvre on Sunday night to savor his election victory, his wife, Brigitte, took his hand and kissed it, tears welling in her eyes.

The love that his parents once tried to banish had conquered all.

As their atypical family joined them on stage, one of Brigitte’s seven grandchildren, Emma, ran to them only to hide, hugging the new president’s leg when she was caught in camera lights.

Their unorthodox courtship is the stuff of high-blown romance, “the love story of the century,” declared Britain’s Daily Mail.

Brigitte was a drama teacher nearing 40—“a vivacious cross between Brigitte Bardot and Jane Fonda”—when their eyes first met over the script of a school play.

Two years later at the age of 17—much to his parents’ horror—Macron declared he would marry the mother-of-three, who later divorced to be with her insistent and “brilliant” young beau.

Brigitte, 64—known to her friends as Bibi (she calls him Manu)—has been a constant throughout his meteoric political rise.

She coaches him before big speeches and even accompanied him to meetings during his time as a minister.

And when her 39-year-old husband won the first round of the presidential poll two weeks ago, they kissed passionately before his cheering supporters.

It is their 25-year age gap, however, that has fascinated the foreign press, even though The New York Times pointed out that it mirrors that between Donald and Melania Trump.

Others have been rather more impertinent.

Daily Mail columnist Jan Moir tried to put herself in Macron’s shoes to ask, “How can I get the world to take me seriously if they think I am a mommy’s boy?”

But the left-leaning Guardian jumped to the couple’s defense.

Even so, columnist Zoe Williams acknowledged the teacher-pupil aspect of their relationship raised awkward questions for feminists—even if women “have to rejoice in Macron kicking against the widespread view that a woman’s attractiveness is pegged directly to how close she is to 18.”

Vanity Fair’s Sophie des Deserts said the couple had consciously modeled themselves on the Obamas, who were much admired for their complicity and intelligence.

Even though she tends to wear Louis Vuitton, Chanel’s legendary fashion designer Karl Lagerfeld was singing Brigitte Macron’s praises as a “super brilliant” woman with a “ravishing figure” long before her husband came through the field as the surprise favorite for the Élysée Palace.

Comparing her to Michelle Obama, he said: “Obama would not have been what he is without the wonderful Michelle.”

But it has not been plain sailing for the pair. Macron had to face down rumors that he was gay, dismissing them as “dinner party chatter.”

“She shares my whole life morning to night and wonders how I could physically do it,” he joked.

“Brigitte has thick skin,” her friend Juliette Bernard told the Parisien newspaper on Monday. “She has needed it.”

To counter the whispers, the couple took to the covers of France’s glossy magazines.

Their obvious chemistry struck a chord with the public, according to Adelaide de Clermont-Tonnerre, editor of the French magazine Point de Vue.

“Their body language is very interesting, they are really tactile and they don’t hide it,” she said.

Last year when Macron was still a rank outsider, they famously invited a Paris Match photographer to immortalize their beach holiday in the southwestern coastal resort of Biarritz.

The couple have always had to fight for respect, according to Candice Nedelec, of Gala magazine, who has cowritten a biography of the Macrons.

“They have battled for their love. And it is with pride that they have climbed the steps to power together. It has been like getting their own back,” she said.

They also share a sense of humor. Which is just as well as France’s most unpredictable election campaign in decades had also been billed as its most Freudian.

Wags on social media joked that the final round was a “contest between a man who has married his mother and a woman who wants to kill her father,” a reference to his far-right rival Marine Le Pen’s bitter feud with the founder of her National Front party, Jean-Marie Le Pen. —AFP