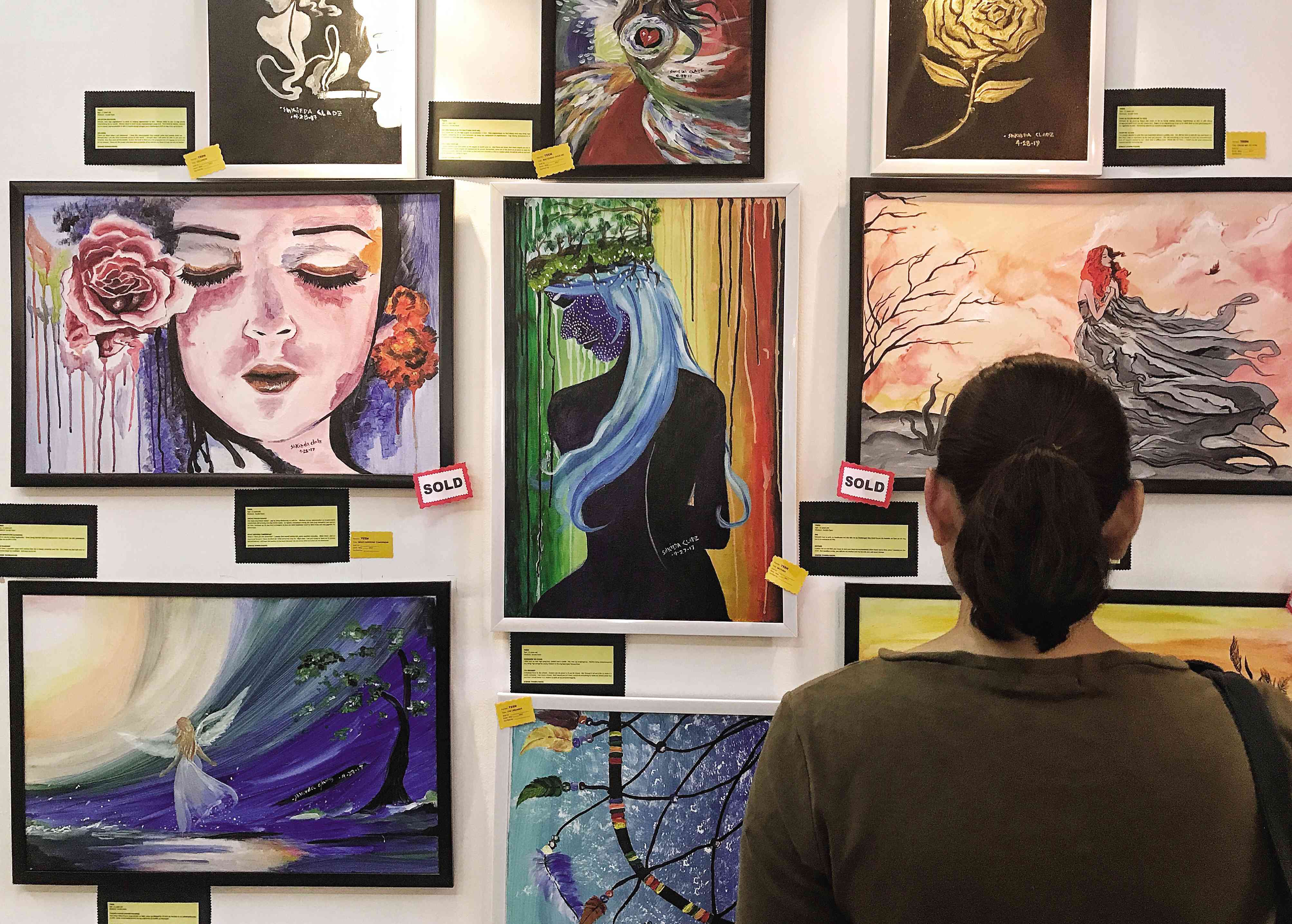 Through colors drawn from emotional depths and brushstrokes exuding renewed confidence, they hope to share their personal journeys from pain to healing.

“Obra ni Nene,” the first-ever art exhibit mounted by Cribs Foundation Inc. features 93 acrylic paintings by 26 young girls who had suffered sexual abuse. It runs until Friday at Palma Hall on the University of the Philippines campus in Diliman.

Artworks depicting their ordeal, transition and recovery seek out viewers who would take pause and understand the girls’ multihued cries: “It’s not our fault.”

Volunteer art teacher Maris Roxas recalled the challenge of introducing the girls to visual art, as most of them came from poor and broken families and were often neglected by their parents or guardians.

“Some of them don’t even know what crayons are,” Roxas told the Inquirer during the exhibit’s opening on Monday. “Half of my students didn’t know how to hold a brush, use watercolor or even rulers.”

But the art therapy sessions soon showed visible results—not just on the canvas but in the girls themselves, who were then on different stages of recovery under the foundation’s New Beginnings program.

“At first, you don’t understand what’s going on in their minds; but after a while, every color they pick means a lot to them,” Roxas noted. “They have come out of their nests.”

Kyle, 16, painted the image of a bruised girl and gave her work the title “Why???”
In the artist’s note, she wrote: “I wish that these people would find it in their hearts not to hurt others… I just want the abuse to stop. Enough is enough.”

But while some artworks depict dark scenes, those done by girls who have long been under Cribs’ recovery program chose a brighter palette—a mirror of their newfound hope.

“This is a painting that tells the story of a young woman who has weathered the storm in her life,” read the note for “Going Back Home,” a piece by 17-year-old Nhio. It shows a girl carrying an umbrella to shield herself from a colorful shower.

“She didn’t have much of a choice when she was taken away from her family, but she knew that she has to do it for her own sake,” the note said. “And now, she is preparing herself because she realized she is now ready to go back home.”

Tearing up, 16-year-old Mary Grace, who painted “Free as a Bird,” said: “Before, I can only draw pencil lines. But now my story is on exhibit. Art has helped me so much.”

For Cribs executive director Josefina Dimalaluan, the artworks tell intimate tales of survival. “For the girls (who created them), there is a sense of accomplishment,” she said. “They see that not only their Cribs family, but many people, supporters and donors, love them.”

A number of paintings were already sold on the first day of the exhibit. Half of the proceeds would go to the artists, while the other half would be used to support Cribs programs.

“Part of the donations would also go to the revolving legacy fund to continue the art therapy program,” Dimalaluan said. All of the materials for the exhibit—from the pencils to the canvas—were courtesy of donors.

Cribs Foundation is also preparing to transfer from its 960-square-meter Marikina City home to a facility three times bigger in Antipolo.

“Our current property sits on a fault line, so we really have to transfer,” Dimalaluan said, adding that fundraising efforts are ongoing for Cribs’ new building.