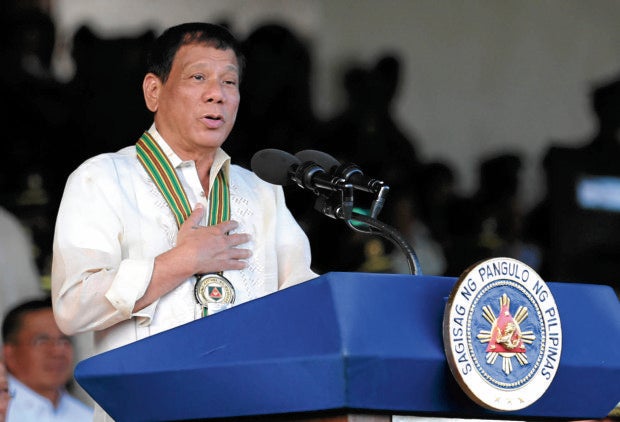 President Rodrigo Duterte said on Tuesday that the courts should not make it difficult for the government to recover its property that are in the hands of the rich, and cautioned them against issuing temporary restraining orders that hamper the cases filed by the state.

Duterte made the statement as he met with close to 200 farmers from Tagum, Davao del Norte who were camped out in Manila to ask the President to intervene and direct Lapanday Foods Corp. to abide by the directives of the government and turn over its lands to agrarian reform beneficiaries.

Farmers belonging the Madaum Agrarian Reform Beneficiaries Association Inc. earlier said they had been forced out by armed guards out of the land that Lapanday has been claiming. This was despite a cease-and-desist order from the Department of Agrarian Reform (DAR) to prevent Lapanday from interfering with the farmers’ activities.

“Whatever is in the law, let us follow it,” Duterte told the farmers.

As long as the requirements of he law could be met, it should be implemented by the DAR to stop trouble from erupting, he said.

Adding some levity to the proceedings, he jokingly invited the farmers to dinner at the Manila Hotel./atm