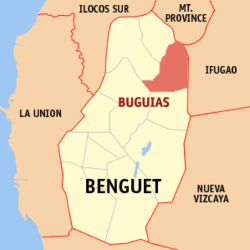 BAGUIO CITY  —  A Benguet policeman was shot and wounded early on Tuesday (May 9), when members of the Buguias town police responded to a mauling complaint at a local pub, the Cordillera police said.

PO3 Jake Dati Guinadan was shot in the left arm allegedly by Jonnie Ian Panganiban Ballo, 27, who was hiding inside the Angels Bar at Bacoling Compound, Abatan village at 12:40 a.m.

Guinadan was part of a team that was deployed to the bar following a complaint made by a man that he was mauled and threatened with a gun at the establishment.

As soon as the policemen knocked on the door, Ballo allegedly opened fire from inside the bar, hitting Guinadan.

Ballo was coaxed into surrendering after a period of negotiations. He gave up a .38-revolver.

Guinadan was treated at the Northern Benguet District Hospital.  SFM/rga