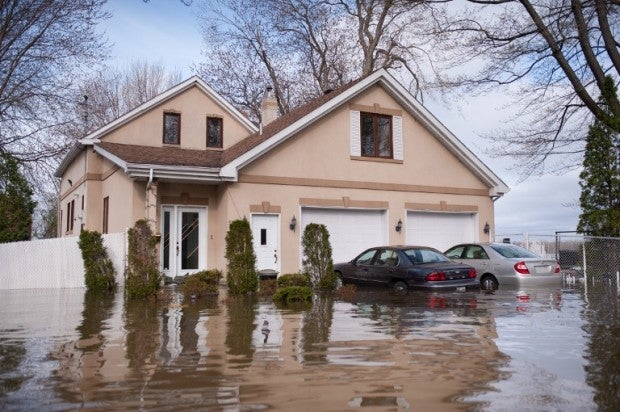 Homes in the Montreal borough of Pierrefonds are flooded on May 8, 2017. With heavy rain persisting and waters still rising over much of waterlogged eastern Canada, the nation’s military tripled the number of troops urgently working to evacuate thousands of residents. Montreal Mayor Denis Coderre declared a state of emergency for his city, allowing authorities to order mandatory evacuations from threatened areas. AFP

MONTREAL, Canada — The toll from severe flooding in eastern Canada worsened Monday with thousands of people affected and schools closed, but authorities were optimistic that rising water levels would soon crest.

The ground is saturated and unable to absorb any more water.

But recent heavy rains have started to subside and “as of Wednesday, we expect to see the situation begin to improve,” Coiteux said.

The Canadian army has deployed troops to help stem the flooding, reinforcing dikes, maintaining water treatment facilities, and protecting other critical infrastructure such as bridges.

Brigadier-General Hercule Gosselin said their ranks would swell to 1,650 later in the day.

Although it is unlikely to get any worse as of Monday, “the situation will last a few weeks,” said Coiteux.

“I have never seen so much water between Ottawa and Montreal,” Sophie Gregoire-Trudeau, the wife of the prime minister, told broadcaster RDI.

The day before, Prime Minister Justin Trudeau accompanied by his two young children, had traveled to the town of Terrasse Vaudreuil west of Montreal to help locals fill sandbags.

There are “exceptional circumstances” behind the flooding, said Quebec Environment Minister David Heurtel, pointing to a month of rain coming on the heels of a spring thaw after a “severe winter.”

For many residents who have been fighting an exhausting battle to hold back the waters, often in vain, despair has started to set in.

In the small community of Pierrefonds, about 30 kilometers (18 miles) from Montreal, resident John Parker was busy Monday morning hauling wet furniture and personal belongings to the curb, as a pump and hose sputtered water from his flooded basement over a wall of sandbags.

“It will get better, because it can’t get any worse,” he told AFP.

Ottawa Mayor Jim Watson said the recovery and cleanup from this “historic flood” will take time.

Federal Public Safety Minister Ralph Goodale said it was the worst Canadian flood in “50 years” but added that the situation was improving in Ontario, where high water levels in one of the Great Lakes — Lake Ontario — threatened coastal communities including parts of Toronto, Belleville to the east and the Thousand Islands region, which is home to thousands of 19th century mansions and cottages.

“We are watching closely the events in New Brunswick” on the Atlantic coast, and in eastern Quebec where the rains “appear to be headed,” said Goodale.

Sunday evening, a 37-year-old man and his two-year-old daughter were reported missing after their car veered into a river and was swept away near Sainte-Anne-des-Monts in the Gaspe region of eastern Quebec.

In British Columbia, on the opposite side of the country, the same combination of rain and snowmelt has caused flooding and mudslides that left at least two people missing, including the fire chief of the village of Cache Creek who had been out checking water levels.

In Quebec, many schools and other public institutions remained closed Monday.

More than 400 roadways have been closed due to flooding across the province. CBB