Sen. Alan Peter Cayetano on Monday led the Philippine delegation in defending President Rodrigo Duterte’s war on drugs before the United Nations Human Rights Council, saying the government has high regard for human rights, rule of law, and international treaties.

In his opening statement during the UN council’s Universal Period Review (UPR) of the Philippines’ human rights record, Cayetano said “there can be no compromise on human rights and dignity of human life” as he refuted claims of abuse and extrajudicial killings amid the Duterte administration’s antinarcotics crackdown. The UPR is a periodic review of the human rights records of all 193 UN Member States.

“The new administration is committed to real change, to institute reforms and to protect the human rights of all Filipinos. The new administration continues to be committed to the obligations accompanying the various international treaties ratified in the previous years. Hence, the Duterte administration has vowed to integrate the human rights agenda in its development initiatives to protect all, especially the most vulnerable sectors, including but not limited to, the indigenous people, children, women, migrant workers, elderly, domestic workers, persons with disabilities, farmers, laborers and members of the LGBT community,” Cayetano said.

“Security and human rights are not incompatible. In fact, without human security, humans are vulnerable to all kinds of abuses. Human rights is not only about making people feel safe, but is actually about making people safe. Illegal drugs can easily destroy a whole generation… Unless we recognize the relationship of illegal drugs, especially crystal Meth or Methamphetamine Hydrochloride, to violent crimes and poverty, we will not understand the Philippine situation,” he added.

Highlighting the Philippines’ “strong and unwavering commitment towards the UPR,” the senator also assailed what he called “alternative facts” supposedly being spread by Duterte’s critics and the media on the drug war, particularly the number of drug suspects killed. 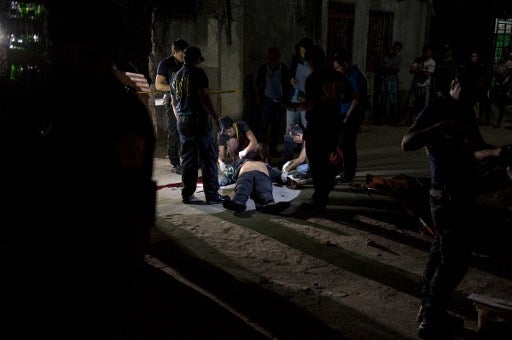 This picture taken on January 18, 2017, shows policemen investigating a body of an alleged drug user on the ground after an unidentified gunmen shot him dead in Manila.
AFP FILE PHOTO

Noting that there are “more deaths due to police operations because law enforcers are now conducting operations every day,” Cayetano also boasted that 1.266 million pushers and users surrendered and 64,917 drug personalities arrested in the antidrug campaign.

“Make no mistake, any death or killing is one too much. However, there is a deliberate attempt to include all homicides as EJKs or killings related to the campaign against criminality and illegal drugs, and that these are state-sponsored, which is simply not true,” he added.

Cayetano called on the UN state delegations to understand “where the Philippines” is coming from as he assured them that the government was committed to solve threats against human rights.

“In closing, the Philippine Government under President Duterte is committed to real change, to peace and development and to addressing the problems of poverty and inequality. Understanding where the Philippines is coming from is essential to our discussions in improving the human rights situation in our country – from decades long communist rebellion, centuries long unrest and rebellion in the south, inequality brought about by social injustices, partly caused by corruption and the few political and economic elites controlling most of the Philippine economy, to the powerful criminal and drug syndicates who act with impunity,” he said.

“President Duterte and his administration are exerting all efforts to address this threat and to bridge differences across our region so that regional peace, stability and sustainable development can cease being a dream and become a reality,” Cayetano added.

Aside from Cayetano, leading the Philippine delegation was Deputy Executive Secretary Menardo Guevarra. This marks the third UPR for the Philippines—the first and second reviews were conducted in April 2008 and May 2012, respectively.

The issues raised in the documents on which the reviews were based on include the issues raised in the above-mentioned documents are:  the Government’s anti-drug campaign; addressing cases of extrajudicial killings and incitement to commit such killings; the proliferation of private armies and vigilante groups; combating torture; tacking impunity and corruption; restoration of the death penalty;

combating human trafficking and exploitation of children, especially girls, for sex tourism; providing assistance to migrant workers and other Filipinos overseas; measures to protect  the rights of indigenous peoples; birth registration and the right to nationality; access to education; child labor; the prohibition of corporal punishment; and the protection of children in armed conflict.