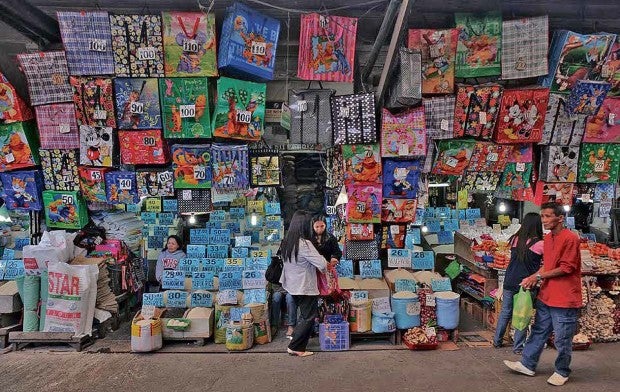 Since 2010, Baguio market vendors have been encouraging clients to purchase colorful and reusable market bags when residents advocated a ban on plastic bags and Styrofoam containers. This month, the city government passed an ordinance enforcing that ban. —EV ESPIRITU

BAGUIO CITY—From now on, residents and tourists alike will have to bring personal market bags that are made of paper, cloth or other “less environment-harmful materials.”

Baguio City Mayor Mauricio Domogan on Tuesday signed an ordinance banning the sale and use of plastic bags and Styrofoam containers in all establishments here, including malls, restaurants, market stalls and even sari-sari stores.

According to the ordinance, “the use of plastic bags and polystyrene foam containers constitutes a percentage of litter which is unsightly, costly and can cause serious negative environmental impact.”

“The cost associated with the use of these materials creates a burden to the city’s solid waste management system,” it said.

Baguio hauls 130 tons of waste each day to a landfill in Capas town in Tarlac province. These exclude waste generated by establishments like SM City Mall, Baguio Country Club, Camp John Hay and the Philippine Economic Zone Authority which have their own waste haulers.

Violators will be fined P5,000 and their business permit suspended for six months.

Bamarvaco is the largest group of market vendors and stall owners at the city market, with more than 3,000 members.

“At first we protested but we eventually understood the reason behind the ordinance. It will also relieve us of the trouble of buying different sizes of plastic bags,” said Alabat, a souvenir and processed food vendor for the last 20 years. —KARLSTON LAPNITEN