To clean PH, let’s get our hands dirty

Cleanliness is a national priority in Singapore and an individual responsibility in Japan. No wonder they’re the cleanest countries in Asia. What about us?
By: Gideon Lasco - @inquirerdotnet
Philippine Daily Inquirer / 12:53 AM May 07, 2017 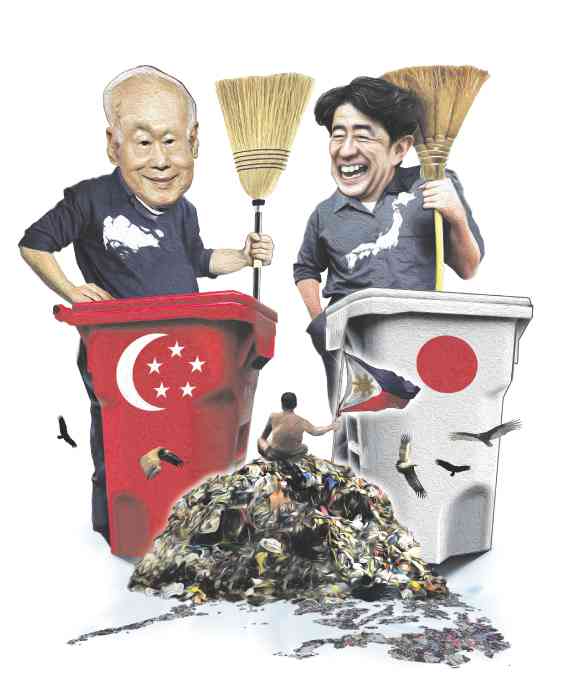 If it were some minor official who said them, the remarks might have been interpreted as another attempt to downgrade the country on the global stage. But it was President Duterte himself who once said that “the Philippines is so dirty (and) the mayors are not doing anything.”

He added: “There (are) trash and garbage around and yet we have to wait for the plastic to enter the drainage so every time there’s a downpour, excessive rain, water, there is clogging.”

Mr. Duterte’s exasperation over the poor state of cleanliness in our cities is shared by many Filipinos, who’d surely view as a welcome development any effort to do something about it. We Filipinos are generally clean when it  comes to our own homes (“Tapat mo, linis mo”), but public spaces are an altogether different matter.

Sadly, no one gets to be 18 in the Philippines without having witnessed someone casually throwing trash from the car window. While we are proud of our country, surely we must also acknowledge that in terms of cleanliness, there’s much to be desired.

This brings us to an important question: What does it take for a country to be clean? Two of our neighboring countries, Singapore and Japan, which are models of cleanliness can provide insightful—albeit contrasting—answers.

Singapore’s cleanliness has long been the envy of many Filipinos, but it did not happen overnight. “At war’s end, the town was dirty, shabby and neglected. The roads were full of  potholes, building were run-down,” wrote Gretchen Liu in her pictorial history of the island country.

It took concerted and sustained efforts, beginning in the 1960s, to make Singapore the “Garden City” that it is today. In 1968—just three years after its independence—its government launched the “Keep Singapore Clean”  initiative, with the three-pronged approach of improving cleaning services, encouraging people to take charge of their garbage and penalizing those who won’t comply.

The government’s attention to cleanliness was such that it became a barometer of its success as a nation. Former Prime Minister Lee Kuan Yew himself said at the  time: “No other hallmark of success will be more distinctive than that of achieving our position as the cleanest and greenest city in South Asia. Only a people with high social and educational standards can maintain a clean and green city.”

In the following decades, cleanliness was institutionalized in the island nation. In the  National University of Singapore where I spent a month as a visiting scholar, there is a garbage can in front of every door and at regular intervals on sidewalks, giving people no excuse for littering.

And when they do, the fines are so severe—up to S$1,000 (around P35,000) and 12 hours of community service for the first offense—that the number of littering cases dropped significantly.

Nowadays, however, Singapore’s own officials fear that their famed cleanliness is being eroded, and that young people no longer share the ethos of their elders. “We are a cleaned city, not a clean one,” once lamented Lee Bee Wah, a Singaporean member of Parliament, after observing  how people continue to litter in the vicinity of an MRT station.

Liak Teng Lit, head of the “Keep Singapore Clean” movement, called it “ridiculous” that the island nation has 70,000 cleaners when its population is only 5 million.

But the fact that cleanliness regularly makes it to the headlines of The Straits Times is itself proof that Singaporeans take the issue very seriously.  In fact, compared to other Southeast Asian cities like Manila, Lee Kuan Yew’s “City in a Garden” remains a good model of what a tropical metropolis can achieve.

If cleanliness for Singaporeans is a national priority, for the Japanese it is an individual responsibility.

One of the many interesting paradoxes in Japan is that in many public spaces—subways, parks and even shopping malls—there are very few or no trash cans at all. Despite this, the entire country is kept clean.

Some writers link this absence of trash cans to the deadly Aum Shinrikyo subway attacks in 1995, that led many Japanese to be suspicious of unknown objects in train stations and public spaces.

Trash cans were seen as a risk because they can easily conceal a bomb. Given this Japanese concern (some might say “obsession”) for safety, the trash bins were removed.

But trash cans were never popular to begin with, noted some observers. “If we put trash cans (everywhere), people are just going to use them,” an insightful article in The Japan Times quoted one resident as saying.

When I was doing  an elective in a Tokyo hospital as part of my medical training, I remember asking Hiro, one of my colleagues, about the dearth of trash cans, and his response was puzzlement: “Why do you need so many trash cans? You can  always keep trash in your bag and take it home. More trash cans will just add a burden to the cleaning staff. Who will collect the garbage then?”

Cleanliness is thus seen as the duty of the individual: Why wait for others to do it when you can do it yourself?

The Japanese ethos of cleanliness is such that even Japanese expats around the world have been known to clean up their neighborhoods.

In 2014, the story of Mazakasa Nose, a Japanese resident in Baguio, went viral: he would  clean the Maharlika Tiongsan overpass during his free time.

They start them young in Japan: As the most devoted anime otakus may have noticed, children—not janitors—are made to clean classrooms in schools.  It is not seen as a punishment or anything to be ashamed of.

There’s a downside, of course. Because of the relative rarity of trash cans, they end up overflowing, with crows swarming on them—something I myself have witnessed. Then there’s the oblique, yet not unrelated, question of how, with their love for elaborate packaging even for small items, the Japanese are creating more waste material, undermining their efforts toward cleanliness.

No fun in aftermath

But whenever I see Japanese businessmen holding empty cans of Calpis Water or instant Doutour, I see the virtue of inculcating individual responsibility.

Alas, in the Philippines, even a fun run is not fun in its aftermath, with a cleanup having to be undertaken. Surely if the runner and novelist Haruki Murakami were to join one such run in the country, he may be in for a disappointment.

What we can learn

The three-pronged approach of Singapore can be a useful template to think about. It has been many years since we’ve had a concerted campaign for cleanliness, something that the government should embark on now.

Improving cleaning services, of course, can go a long way, but I wonder if we really want an “army of cleaners” who will be a burden on our strained resources—as Singapore itself is beginning to see.

In line with President Duterte’s stress on discipline, perhaps a stiff, properly implemented fine for littering can help, just as it did in Singapore.

But even the Singaporeans look up to the Japanese example, which may well be what will clean up the country in the long run. For the Japanese,  indeed, cleanliness is not a matter of legislation; it is simply the only way to live.

Perhaps, we need to rethink how we are educating our children about cleanliness.

One lesson is clear: If cleanliness is next to godliness, then we should value not just the act of cleaning, but also the people for whom cleaning is a job: the street cleaners and janitors.

Cleaning must not be seen as a punishment or a lowly task, but a privilege and a responsibility. Alas, in the Philippines janitors and trash collectors are looked down on and are the butt of jokes in many a TV show.

Both Japan and Singapore are wealthy nations, raising the idea that cleanliness is a natural byproduct of economic growth. But as the Singapore example shows, we can end up being a “cleaned” nation, not a clean one. And so in the long run, we must look at cleanliness not as a duty for which we can be penalized for neglecting but, like the Japanese, as the only way to live.

We all want to achieve cleanliness, but are we willing to do the cleaning? To make our country clean, we need to get our hands dirty.