In Mosul, hunger grows amid slow advances against IS 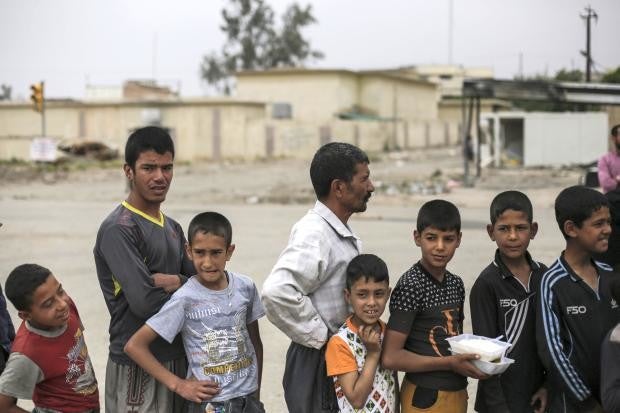 In this photo, taken May 2, 2017, Mosul residents wait in a queue for food distribution in western Mosul, Iraq. As Iraqi forces continue to make slow progress in the fight against the Islamic State group in Mosul, food supplies are running dangerously low for civilians trapped inside militant-held territory and those inside recently retaken neighborhoods. (Photo by BRAM JANSSEN / AP)

MOSUL, Iraq — Aliyah Hussein and the 25 family members sheltering with her in Mosul’s western Mahatta neighborhood are surviving by picking wild greens growing in a park near their home. Hussein mixes the vegetables with small amounts of rice and tomato paste to make a thin soup that is often her family’s only meal.

Her cousin Zuhair Abdul Karim said on a recent day that even with the wild greens, the food ran out.

“I swear to God, we are hungry. (The Islamic State group) made us hungry. They didn’t leave anything for us, they even stole our food,” Hussein said. Her home sits just a few hundred yards (meters) from the front line in the battle for western Mosul.

As Iraqi forces continue to make slow progress in the fight against IS in the city, clawing back territory house by house and block by block, food supplies are running dangerously low for civilians trapped inside militant-held territory and those inside recently retaken neighborhoods. For families like Hussein’s, safety concerns make them unreachable for most humanitarian groups.

Although Hussein has technically been liberated, her neighborhood is still too dangerous for most humanitarian groups to reach. In the past week she said she received only one box of food consisting of rice, oil and tomato paste, barely enough to feed her entire family even for a single day.

“The women didn’t have lunch. Only the children and men have eaten,” Abdul Karim said, explaining that he and his family are now living meal to meal. “We don’t know if we’ll have dinner,” he said, “maybe or maybe not.”

Some families walk several kilometers (miles) to markets that have sprung up in neighborhoods that have been under Iraqi military control longer. But prices there are high. Most families have exhausted their savings and work is almost non-existent in Mosul, a city now been ripped apart by war.

“The humanitarian world needs to realize that there is a huge gap between people who are in the safe zone and people who are actually trapped in the no man’s land between the Iraqi controlled areas and … Daesh controlled areas,” said Alto Labetubun with Norwegian People Aid, one of the few groups operating in neighborhoods close to the front line. Daesh is the Arabic acronym for the Islamic State group.

Some 300,000 to 500,000 people remain beyond anyone’s reach, trapped in IS-held Mosul neighborhoods, according to the United Nations. For those civilians, siege-like conditions have prevented food supplies from reaching them for more than six months.

Most of those civilians are estimated to be in Mosul’s old city, where the final battles of the operation are expected to play out. If the fighting there lasts many more weeks, the U.N. warns the consequences for civilians will be “catastrophic.”

“We know we have a problem because when people reach our camps the first thing they ask for is food,” said Lise Grande, the UN humanitarian coordinator for Iraq. She said it’s impossible to measure exactly how many families are facing what she described as “serious hunger” inside Mosul, but the conditions of the people fleeing the city paint a grim picture of those who remain trapped.

Hundreds of infants and young children who recently fled Mosul are being treated for malnutrition, Grande said. Separately, she added that the UN had received reports that even baby formula in IS-held neighborhoods is now no longer available,

“If the battle goes beyond (the next few weeks), then we have a catastrophic problem,” she said.

In the Wadi al-Hajar neighborhood hundreds of people queue for food boxes delivered by Norwegian People Aid. But most of them are turned around as there aren’t enough supplies to go around. A small crowd of women begged the aid workers for food after the last boxes were handed out.

Ibrahim Khalil, also turned away, said his hunger was so intense, he felt like he was starving.

“Didn’t they claim they’d liberate us from Daesh?!” he said referring to the Iraqi government, “and they’d change our lives from misery to happiness?”