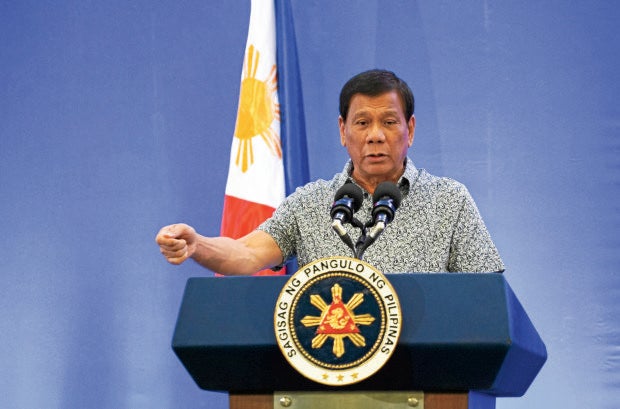 PARANG, Maguindanao — President Rodrigo Duterte on Friday said he was losing hope in the outcome of the peace process with Moro rebels because of infighting among them.

Speaking before members of the Autonomous Region in Muslim Mindanao police force here, Mr. Duterte said he recognized that the Moro issue was “a legitimate grievance, which we are trying to resolve.”

“I am talking to the (Moro Islamic Liberation Front) and also the MNLF (Moro National Liberation Front) but apparently they’re squabbling over (territories). So I’m at a loss. I was very optimistic before but I’m a bit pessimistic now,” he said.

He said MNLF chair Nur Misuari was “keeping his silence but [talked] to me in private.”

The President said he was now worried that “nothing would come out of this (talks).”

However, Mr. Duterte said he was still hoping for the success of the talks.

He also urged policemen to do their duty even if “sometimes, it could end not only your career but your life.”

He then reassured them of full government support for their families, in case they meet misfortune in the performance of their duties.

“Our constant worry is what would happen to our children when we leave. Your children will be assured of education and your wives will be given employment. I wouldn’t leave you wanting,” he said.

Mr. Duterte pledged that by the time he leaves the Presidency, “I would have invested [billions] for the trust fund of your children and family.”

“I have nothing but the best for all of you,” he added.