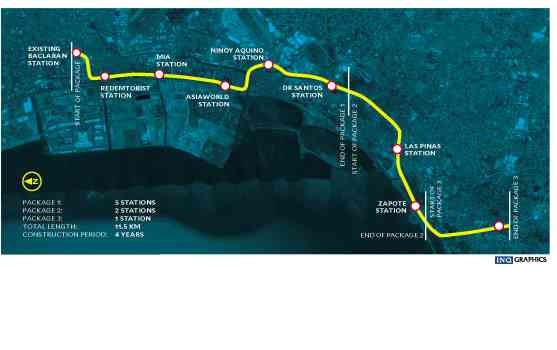 Construction of the Light Rail Transit Line 1 (LRT-1) extension to Cavite province is finally under way, with its private sector operator expecting it to be operational by early 2021.

Transportation Secretary Arthur Tugade led the groundbreaking ceremony on Thursday in Barangay San Dionisio, Parañaque City, along with officials of the Light Rail Manila Corp., which won the contract in 2014 to operate and maintain LRT-1 for 32 years and extend it by 11.7 kilometers to Bacoor, Cavite.

The extension project, which will give rise to eight new stations, should reduce travel time from Metro Manila to Bacoor from two hours to just 40 minutes, according to LRMC president and chief executive officer Rogelio Singson.

The eight new stops will be the Aseana, MIA, Asia World, Ninoy Aquino and Dr. Santos stations in Parañaque; Las Piñas and Zapote stations in Las Piñas City; and the Niog station in Bacoor.

“We hope to be able to have the revenue line operational by the first quarter of 2021. That’s the timeline,” Singson said, noting that the project could be finished even as early as mid-2020 if there would be no more delays caused by right-of-way issues and informal settlers.

“We will need a lot of cooperation from the LGUs (local government units),” Singson said, adding that some segments of the route still have power cables and water pipes that need to be moved.

LRMC, which is mainly owned by Ayala Corp. and Manuel V. Pangilinan-led Metro Pacific Investments Corp., originally planned the construction to start in 2015 but right-of-way issues kept holding it back.

In Parañaque, the last 10 families whose shanties are blocking the path of the extension tracks in Barangay San Dionisio were set to be relocated Thursday afternoon, Mayor Edwin Olivarez told the Inquirer

The project is also expected to double the capacity of the LRT-1, the oldest elevated rail line in the country, to over 800,000 riders daily, while spurring development south of the capital.

The entire project was valued at P65 billion. LRMC would spend P35 billion while government would shoulder the rest, a huge component of which would be the delivery of 120 new train cars from Japanese manufacturers since it was supported by a loan from the Japan International Cooperation Agency.

Singson said the Department of Transportation was evaluating offers from Japanese firms Marubeni and Mitsubishi. LRT-1 has about 100 operational light rail vehicles as of end-2016, up from 77 when Light Rail Manila took over operations in 2015.