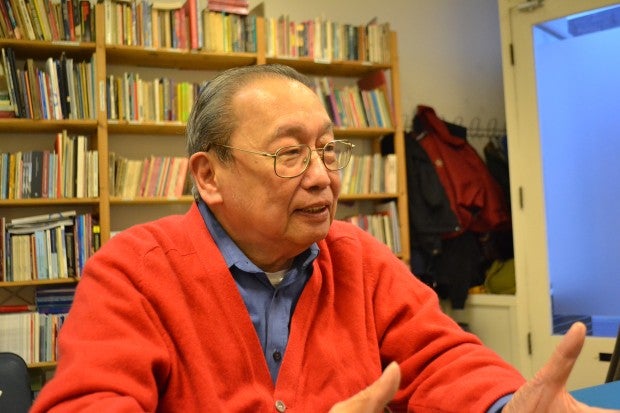 LUCENA CITY—Continuing the peace talks between the government and the National Democratic Front of the Philippines has become more important even after recent communist attacks, Communist Party founder Jose Maria Sison said.

“It is still possible and even necessary to engage in peace negotiations precisely to work out [a ceasefire] agreement,” Sison said on Thursday after the government expressed dismay at the communist attacks in Davao City and Quirino province.

“It is better to negotiate peace and work out the interim joint ceasefire agreement in connection with [the Comprehensive Agreement on the Social and Economic Reforms] and the amnesty of the political prisoners,” he said.

Sison defended the New People’s Army (NPA) attacks on a food processing facility in Davao City and a police station in Maddela, Quirino on April 29.

“The people and revolutionary forces have to defend themselves and take the offensive wherever and whenever they can,” Sison said in reply to the dismay expressed by Peace Process Secretary Jesus Dureza on Wednesday.

While the government is determined to push through with the fifth round of talks that are set to resume in The Netherlands starting May 26, Dureza said there were also calls to stop the talks altogether.

But Sison said “it is the lookout of the [government] if it wants to kill the peace negotiations.”

“If Mr. Duterte ends these, then its all-out war will [only] add to the issues of human rights violations and economic decline [that will] further discredit his regime,” Sison said.

At the same time, the NPA unit responsible for the April 29 attack on a facility of the Lapanday Foods Corp. in Davao City also tried to justify its attack on the civilian facility.

On the same night, 50 armed rebels stormed a police station in Maddela town in Quirino. A policeman was killed during the siege.

Rigoberto Sanchez, spokesperson of NPA-Southern Mindanao Regional Operations Command, said the Davao attack was “just retribution and an act of social justice against a feudal lord and capitalist that continues to be protected by state instrumentalities.”

Sanchez was apparently referring to the family of influential businessman Luis “Moro” Lorenzo but Lapanday Food is actually owned by Moro’s son, Martin.

The NPA said the attack also served as “revolutionary justice for landless tillers and exploited workers of its banana plantations and manufacturing plants in the region.”

On April 29, a band of NPA rebels attacked the facility of Lapanday Foods Corp. in Davao City and torched its equipment and seized firearms from the company’s security guards.