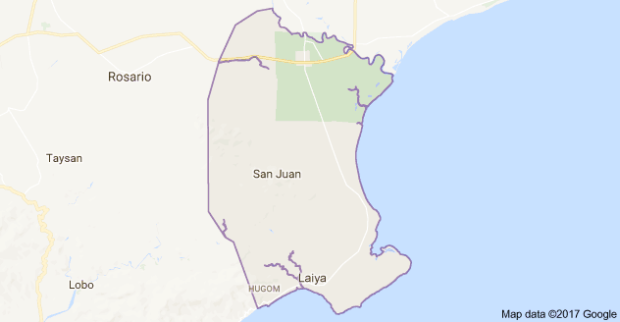 San Juan is a coastal town in Batangas (Google maps)

SAN PEDRO CITY, Laguna — A woman tagged as a ranking official of the Communist Party of the Philippines (CPP) in Southern Tagalog was arrested along with her husband at a government checkpoint in San Juan town in Batangas province on Wednesday, police said on Thursday.

Jackqueline Alog, the suspected CPP leader, also known by the aliases “Jack,” “Inah,” “Dragon,” and “Gwen,” was arrested at 5 p.m. Wednesday in Barangay (vllage) Libato. She was with her husband, Edwin, during the arrest.

Chief Supt. Rex Anongos, chief of the police Criminal Investigation and Detection Group (CIDG) in Calabarzon, on Thursday said they were preparing Alog’s documents for the return of the arrest warrant to the issuing court in Infanta town in Quezon province.

Alog is facing a murder case.

Alog and her husband were turned over to the CIDG headquarters in Calamba City in Laguna province but Anongos said they released Edwin since he was not included in the warrant.

He said Alog would be taken to Infanta on Thursday.

In a separate interview, Supt. Meliton Salvadora, San Juan police chief, said the local police acted on information from the CIDG and the Intelligence Service of the Armed Forces of the Philippines that a “wanted” person on-board a Honda City car would be passing through San Juan.

The vehicle was flagged down at a checkpoint. While police were inspecting the car, Alog and her husband were able to flee.

“They said they would just get something from the car but instead hailed a tricycle and escaped,” Salvadora said.

Police eventually traced the couple’s location and arrested them.  SFM