MANILA, Philippines—“Stay out of my family’s affairs.” 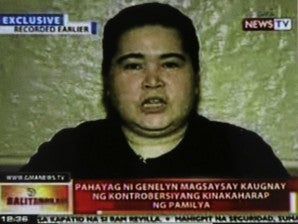 BITTER FEUD A TV screen grab of Genelyn Magsaysay on Sunday, Nov. 6, 2011, reading her statement that hit Senator Ramon “Bong” Revilla Jr. for allegedly accusing her two children of being involved in the killing of her other son Ramgen Bautista. INQUIRER PHOTO

The bitter feud among the Revilla-Bautista siblings took another sordid turn on Sunday, as Genelyn Magsaysay expressed her displeasure over Senator Ramon “Bong” Revilla Jr., whom she criticized for meddling with her family and her son’s case.

Reading from a written statement, Magsaysay lamented the violent killing of Ramgen Bautista, her son by former Senator Ramon Revilla Sr., and the crime being pinned on her two younger children.

“What happened to us was very painful. My son died in a violent way, while my other children are being tagged as masterminds of this heinous crime,” Magsaysay said in Filipino. “I only ask one thing and that is to stay away from my [family‘s affairs].”

“You don’t have the right to speak for and in behalf of my children, because they are my children, not yours,” she continued, apparently referring to Revilla Jr. “If you want to talk, talk about your own children and not about my children.” (Senator Ramon “Bong” Revilla Jr. is one of the children of former senator Revilla Sr., the clan patriarch, with his legitimate wife, who has passed away.)

Magsaysay defended Ma. Ramona’s decision to leave the country, which the mother said was her daughter’s “decision” and which she respected. She insisted that Ramona left out of fear.

She questioned the motive of Senator Revilla Jr. in bringing to the authorities her son Ramon Joseph and said that was probably a political move by Revilla Jr. to protect his name in future elections.

“Why does it seem that the senator has a grudge against my children to the point that he accuses them of this heinous act [referring to Ramgen’s murder]?” Magsaysay asked. “Think about it.”

Revilla Jr.’s pronouncements that Ramona may have been involved in the killing of her brother as evidenced by her flight did not sit well with Magsaysay. Her children were looking for their “elder brother to protect them and not pin them to the crime.”

She appealed to authorities to let the process take its due course starting with the preliminary investigation on Tuesday.

Ramona slipped out of the country on Friday for Hong Kong and was believed to be heading to Istanbul, Turkey, where her husband is based. She has been named by the police as one of the suspects in the killing of Ramgen because she was there at the scene of the crime, but did nothing to immediately get an ambulance for Ramgen and his wounded girlfriend.  Witnesses also saw her calmly walking away from their house where Ramgen was killed around the time of the crime, contrary to her claim that she was abducted by the killers and dumped at a Las Piñas mall.

Ramgen’s girlfriend, Janelle, who was shot, recounted seeing Ramona inside the room as the victims were being attacked. Ramgen’s personal assistant Ronaldo Angcajas said he saw Ramona and Ramon Joseph leave the house on foot.

Magsaysay stood firm that her daughter had “direct personal knowledge of the incident,” which made Ramona, to her mind, “a state witness, not an alleged brutal killer.”

Both Ramona and RJ were free to do what they wish at this point since no case has been filed against them, she added.

RJ was arrested on Wednesday last week and was being held at the Parañaque City Jail. His lawyer Dennis Manzanal questioned RJ’s detention before the Prosecutor’s Office.

Genelyn also maintained that she had the sole right to sue since she was the immediate kin of the victim. She was surprised that “someone filed a case and my children are being accused of it.”

But with murder being a public crime, the police could exercise jurisdiction over the case, said the police.