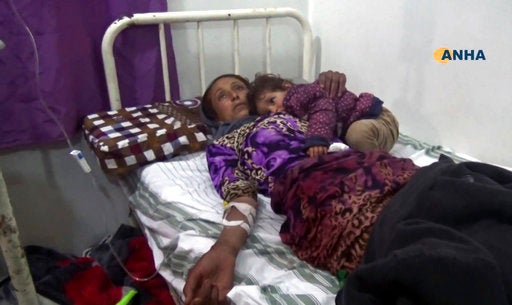 This frame grab from video provided by the Hawar News Agency, shows a woman wounded in an attack by the Islamic State group, in bed at a clinic in Hasakeh province, Syria, Tuesday, May 2, 2017. Islamic State militants staged a surprise attack early Tuesday at a crossing frequently used by Iraqi and Syrian civilians seeking safety in northeastern Syria, killing at least 37 people, most of them civilians who had fled fighting in areas held by the extremist group, Kurdish officials and activists said. (Hawar News Agency, via AP)

BEIRUT, Lebanon—A jihadist assault led by suicide bombers killed dozens Tuesday at a camp for the displaced near Syria’s border with Iraq, as pressure grows on the Islamic State group in both countries.

The violence left at least 46 people dead and came as another surprise IS attack on Tuesday killed 10 soldiers in Iraq, to the south along the border.

As the tolls mounted, US President Donald Trump and his Russian counterpart Vladimir Putin discussed the need for “safe zones” in Syria in a telephone call, said the White House.

IS appears to be lashing out as it faces escalating offensives on its last two major bastions: second city Mosul in Iraq and Raqa in neighboring Syria.

Its dawn attack in Syria’s northeast hit a makeshift camp near the border with Iraq where some 300 families were waiting to cross into territory held by the Syrian Democratic Forces, the US-backed alliance leading the assault on Raqa.

The Syrian Observatory for Human Rights said at least five suicide bombers blew themselves up inside and outside the camp in Hasakeh province.

The monitoring group said at least 46 people were killed, including 31 civilians.

IS claimed the attack via its propaganda outlet Amaq, saying a groups of jihadists attacked an SDF position near the camp as part of a multi-pronged assault on the group.

Kamal Derbas, a press officer for the Kurdish Red Crescent, said the attack began at 4:00 am (0100 GMT).

Thousands of people — from the Syrian province of Deir Ezzor further south and from the Iraqi city of Mosul across the border — have used the crossing to reach safety, according to the International Rescue Committee.

“We are appalled and saddened to hear of the attacks today in Hasakeh province,” said IRC regional advocacy adviser Thomas Garofalo.

Conditions in the area are harsh, with little shelter, the authorities overstretched, and the risk of renewed violence.

The charity Save the Children condemned the attack, saying it “regards the targeting of civilians, particularly children, as abhorrent”.

It said about 400 displaced people and refugees were being relocated to another camp as a result of the attack and ensuing gun battle.

The IS attack in Iraq saw jihadists fire on an army base near the remote outpost of Rutba, near the country’s western borders with Syria and Jordan.

IS appeared to be trying to breach the defense of Rutba, which is the last sizeable town on the road from Baghdad to the Jordanian border, as well as to create diversions to ease pressure on its fighters in Mosul, military officials said.

A massive offensive was launched in mid-October to retake Mosul, where IS head Abu Bakr al-Baghdadi declared the establishment of IS’s so-called “caliphate” nearly three years ago.

IS once controlled swathes of land on both sides of the Iraqi-Syrian border, but US-backed offensives have seen much of that territory retaken.

A US-led coalition began bombing IS positions in Iraq in August 2014 and launched raids against the jihadists in neighboring Syria the following month.

In northern Syria, the coalition is backing the major assault by the SDF — an alliance of Arab and Kurdish fighters — on Raqa.

A key waypost in that offensive is the city of Tabqa, which lies along the Euphrates River and on an IS supply route about 55 kilometers (35 miles) west of Raqa.

On Tuesday, the SDF battled to clear IS from a final pocket in northern Tabqa after seizing 90 percent of the city, the force and a monitor said.

“Once the last pocket is done, the city will be liberated — but taking the dam will be the hardest part of the Tabqa campaign,” Ahmad Mohammad, an SDF press officer, told AFP.

The Observatory said the SDF was now in control of 90 percent of Tabqa and that there were still between 300 and 400 jihadists holed up in the north of the city.

More than 320,000 people have been killed in Syria since the country’s conflict began in March 2011 with anti-government protests.

Read Next
Clinton says FBI chief and Putin cost her election
EDITORS' PICK
Biden vows to stand with Asia on freedom, hits at China on Taiwan
Work-From-Home is here to stay and requires reliable logistics
NCR’s COVID-9 alert level may be downgraded from 3 to 2 soon — DOH
FDA reviewing COVID-19 vaccines’ EUA for booster shots
Climate Change Commission and Nestlé PH to discover sustainability-focused solutions
Legarda emphasizes role of ICC/IPs in nation building this IP month
MOST READ
Drivers now required to take driver’s education upon license renewal – LTO
Gordon to Duterte: You? Teaching me courtesy?
Marcos Jr’s ‘special diploma’ from Oxford: You can have it, too
Can Marcos Jr. be disqualified?
Don't miss out on the latest news and information.