Vowing to protect the will of the people in last year’s elections, Vice President Leni Robredo on Tuesday said she would never allow the son and namesake of dictator Ferdinand Marcos to grab the second highest office in the land and return to power.

“Even if it’s difficult, even if we’re going through many challenges, we will not let the voice of the people be taken away,” Robredo said in a brief speech to her supporters outside the Supreme Court where she had paid an election protest fee of P8 million.

That amount was the first installment of the P15.5 million cash deposit set by the Presidential Electoral Tribunal (PET) for her counterprotest against former Sen. Ferdinand “Bongbong” Marcos Jr.

She said the country suffered during the dictator’s brutal martial law regime, some of whose victims were among her supporters, including former Commission on Human Rights chair Etta Rosales. They were joined by activist priest Robert Reyes and members of the online group The Silent Majority.

Robredo said the martial law victims had inspired her to continue her fight against the return of the Marcoses to power.

“Their fight was bigger, tougher than mine,” the Vice President said in Filipino. “They have suffered and they have struggled but until now, they’re still here, after many decades. They’re still fighting for their rights.”

Raising the P7.5 million balance by July would be her next challenge, according to Robredo’s legal adviser, Ibarra Gutierrez.

Gutierrez said he was still studying if the Liberal Party could contribute, as it was unclear whether the political party could do so under the Omnibus Election Code.

The Marcoses have vowed to check where their funds would come from, Robredo said. 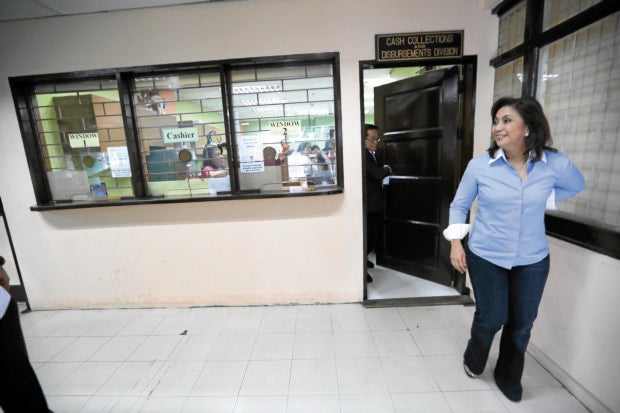 Sometimes called the “second widow in yellow” to defeat a Marcos, Robredo challenged the former senator to declare that “his family did not steal from the nation’s coffers.”

She said it was easy for Marcos to pay P36 million, the first installment of the P66.2 million cash deposit he was required to put up. The total amount would cover expenses for the examination of the election results from 132,446 polling precincts that he had questioned.