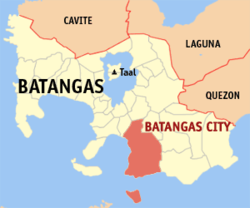 The car belonged to a suspected drug pusher that was targeted in a drug buy-bust in BF Homes, Parañaque, around 12:15 a.m.

Supt. Herbert Baylon, assistant chief of police for operations of the Parañaque police station, said that operatives of the city police’s Station Drug Enforcement Unit conducted the buy-bust against a man they identified by his alias, “RJ”, a resident of Aguirre Avenue, also in BF Homes.

The suspect evaded arrest by escaping onboard his car towards the South Luzon Expressway after he sensed that he was transacting with a police officer.

Authorities located the vehicle at around 8:40 a.m. at the Batangas Port parking area still containing the illegal drugs. The suspect was nowhere to be found.  SFM/rga

Read Next
Lopez: Mining not evil but leaves much to be desired
EDITORS' PICK
Google won’t accept election ads for 2022 national polls
Smart offers wireless fiber-like speeds to Filipino homes with country’s first 5G Prepaid Home WiFi
This new condo in the South will make you want to turn a new leaf
Legarda: Ending Violence Against Women, a cause for all
EJ Obiena’s coach rebuffs Patafa ‘witch hunt,’ says he never complained about pay
Jonel Nuezca, convicted ex-cop, collapses and dies at Bilibid
MOST READ
Jonel Nuezca, convicted ex-cop, collapses and dies at Bilibid
Carlos vows to let PNP personnel spend time with family during holidays, work near their home
Bongbong Marcos to face another disqualification case
US and other countries tighten travel rules over Omicron as EU urges vaccination
Don't miss out on the latest news and information.