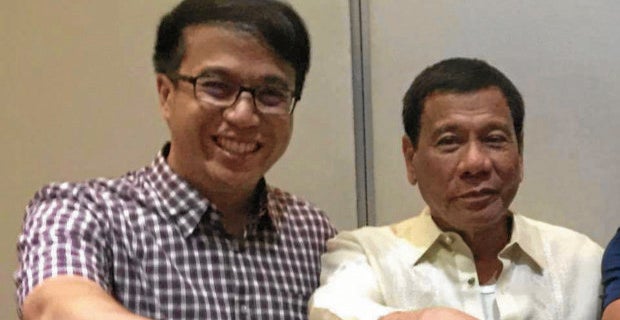 A day before the resumption of the confirmation hearing on the appointment of controversial Environment Secretary Gina Lopez, some allies of President Duterte have suggested a new name to replace her for the post—just in case.

In a statement on Monday, leaders of Mr. Duterte’s party PDP-Laban in Caraga, his campaign groups, and his fraternity Lex Talionis endorsed 37-year-old lawyer and former local government official Mark Kristopher Tolentino for the position.

In the last elections, Tolentino was the sole PDP-Laban candidate endorsed by Duterte in the Caraga region, for the mayoralty of his hometown Cabadbaran City, though Tolentino lost in the race. Tolentino previously made a name as the town’s youngest municipal councilor at 15-years-old, as president of the local Sangguniang Kabataan. He also served in the Office of the Solicitor General.

Tolentino, also a graduate from the President’s alma mater, San Beda College, is currently a private litigation lawyer, a professor at the De La Salle University, and a host of a public service legal consultation program on radio.

“What’s even more laudable with Tolentino’s impressive credentials is his advocacy for responsible mining. Being a resident of Caraga region where mining activities are widespread, he is a hard-hitting advocate against destructive mining and condemns the proliferation of illegal mining operation in his region,” said PDP-Laban Caraga regional chair Manny Lumanao, in a statement.

“Although he supports the utilization of our mineral resources as drivers of economic progress in host communities, he finds the middle ground where environmental protection also must be drawn,” Lumanao added.

For his part, Y! Duterte founding member Jun Alvizo noted: “Once and for all, let someone from the place directly affected by environmental destruction, such as destructive mining, be appointed to head the agency concerned.”

In a phone interview, Alvizo said his group endorsed Tolentino because he is a staunch “advocate against environmental destruction,” but at the same time, “his approach would be more careful, because he knows the law…He would approach problems in a more scientific way.”

However, Alvizo clarified they were endorsing Tolentino only “in the eventuality” that Lopez would not be confirmed.

Valerie Duque Abella of the Rody Duterte Support Group in Davao, who initiated a signature campaign for Tolentino’s Cabinet appointment, said: “The legal perspective of [Tolentino], add to that his passionate crusade on environmental protection and personal exposure to the mining industry, truly serve him best in becoming a good alter ego of the President.”

Retired Court of Appeals Justice Francisco Nick Acosta, Duterte’s law school classmate and fraternity brother, as well as San Beda Law Alumni president, says of Tolentino: “He continually strives for professional growth and is an excellent servant loyal to the country and is for this administration’s clean and good government….Our brothers in the Lex Talionis Fraternity will not be surprised if he is endorsed or appointed by the President.”

On the other hand, the communist-led National Democratic Front of the Philippines (NDFP) has thrown its support behind Lopez, as well as other leftist Cabinet Secretaries Rafael Mariano for Agrarian Reform and Judy Taguiwalo for Social Welfare.

In a statement, Fidel Agcaoili, NDFP panel chair, noted that the three Secretaries’ inclusion in the Cabinet “bodes well for the entire peace process as they would be in a position to help push much-needed socio-economic reforms.”