Sara Duterte slams NPA: You think the world is all about you | Inquirer News
Close
menu
search

Sara Duterte slams NPA: You think the world is all about you 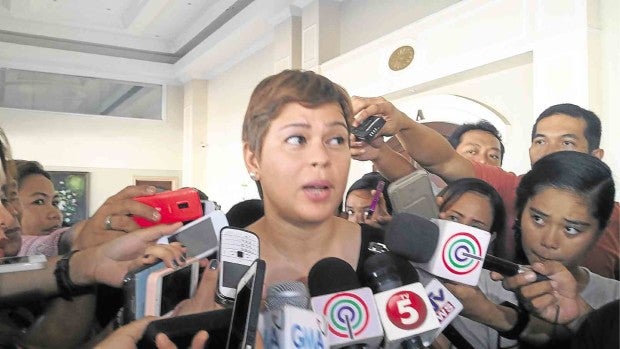 Davao City Mayor Sara Duterte took a swipe at communist rebels for calling her a “hypocrite” after criticizing an attack at several facilities of Lapanday Foods Corporation in Davao City last Saturday.

“I may be a hypocrite to you, but you are stupid to me and all the peace-loving Dabawenyos. Terrorists and fake organizations do not have the right to talk about social justice. Show me your faces and then maybe I will listen to your rant about social justice,” she said in a statement released on Monday.

Communist rebels torched equipment and disarmed security personnel at several facilities owned by the Lorenzo clan in Southern Mindanao. The attacks were launched while the Philippines hosted the 30th Asean summit held in Manila.

A statement released by “Pambangsang Katipunan ng Magbubukid, Southern Mindanao Region” called Duterte a hypocrite as her husband, Atty. Mans Carpio, is a legal counsel for the Lapanday Foods Corp.

“Thus, for Sara Duterte to claim the NPA’s assault in the Lorenzo-owned businesses in Davao City a ‘personal insult,’ is not only hypocritical but downright self-serving,” the statement of the rebels linked to the National Democratic Front read.

The group said they were “overjoyed” that their members were able to punish the Lorenzos for allegedly “oppressing peasants and Lumad who are victims of their direct landgrabbing and exploitative schemes through onerous growership contracts.”

The lady mayor mocked the statement of the rebels which misspelled “Pambansang” as “Pambangsang.”

“Look, you cannot even spell the word ‘Pambansang’ correctly. Bumbling idiots,” she said.

Duterte made clear that that she and her husband are “separate entities.”

“We do not discuss the job that we chose to do, we just commit to sincerely work and earn money for the benefit of our children.”

The lady mayor said she condemned the attack after being deeply affected of what happened. She broke the news to a victim’s family who was badly injured from the explosion.

“Larry had no one with him so I was the one who had to read through his text messages to look for a family member. I was the one who called his wife, broke the bad news, and asked her to come and stand by her husband’s side,” she said.

Larry, who sells fruits and fish for a living, was passing by Mandug road when a bomb went off.

“The victim was the very person that you said should be defended from injustice.”

“So when I condemned what the NPA did, I spoke for Larry. But you did not know that, did you? You just assumed when I say personal, it is all about my life. Because this is how you are. You are selfish individuals and you think the world is all about you,” Duterte said.

“We now have 130 employees without work and Larry is still in a coma. And yet the Lorenzos will still have the money that you and I can only dream about in this lifetime. It did not even make a dent in their bank accounts,” she also said. JE