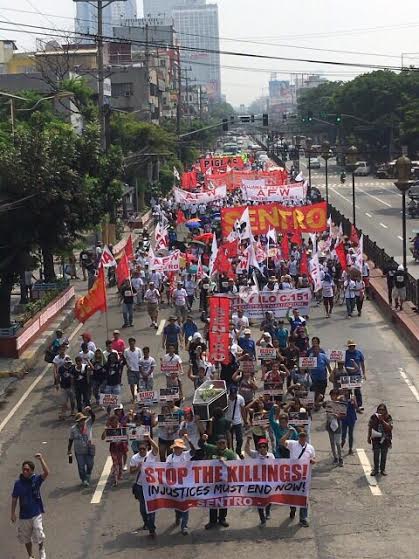 Workers’ groups march on the streets of Manila, calling for higher wages and an end to contractualization on Labor Day, May 1, 2017. (Photo from the Sentro ng Nagkakaisa at Progresibong Manggagawa.)

MANILA — A workers’ group warned of “an uprising among the working poor” if the government would ignore worsening poverty caused by joblessness, insufficient wages and short term work arrangements.

ALU spokesperson Alan Tanjusay noted that the poorest of the poor have been forced to raid rice warehouses, invade government housing units and claim ownership of lands that were not theirs.

“We do not condone nor tolerate these illegal actions but we attribute these series of lawlessness as symptoms of an irresponsive government and inhumane employers and capitalists,” he said.

Thousands of workers took to the streets on Monday to commemorate Labor Day, urging the government and employers to respond to the diminishing value of wages against rising inflation.

These are way below the 2015 standard poverty level of P 393, which is required by a family of five for food and non-food needs.

“This condition needs immediate response from government and employers. Workers are now desperate and if this is met with inaction, many will resort to desperate means to survive,” Tanjusay said.
‘
According to Tanjusay, the government’s Labor Force Surve has shown that of the 69.4 million work force, only 39.4 million Filipinos are employed; 2.8 million are without jobs; while 6.4 million are underemployed.

The ALU urged the government to enforce laws and implement programs to make the money trickle down to the poor.

“Analyzing these numbers, the cause of concern out of this survey is not just on those jobless but we are monitoring the behavior of the underemployed as well or those who have jobs yet their income is inadequate to meet their needs,” Tanjusay said.

The Pagkakaisa ng Manggagawa (PAGGAWA or the Unity of Workers) slammed the order strictly regulating lawful contractual arrangements, and puts an end to the “endo” or end of contract scheme.

The group claimed that the order issued by Labor Secretary Silvestre Bello III was “a rehashed and worse version of its predecessor” as it called on Bello to revoke the order.

The PAGGAWA is composed of the Bukluran ng Manggawang Pilipino, Association of Genuine Labor Organizations (AGLO) and National Federation of Labor Unions, Solidarity of Unions in the Philippines
for Empowerment and Reform Federation and Metro East Labor Federation.

“The huge number of workers and ordinary folk participating in this year’s Labor Day is testament to the growing frustration with the Duterte administration and dissatisfaction in fulfilling his promise,” said BMP president Leody de Guzman.

De Guzman told President Duterte to “get his act together” as “betraying the working class would mean its collective withdrawal of support from his administration.”

The PAGGAWA declined the Palace invitation to join the President in Davao City where Duterte will lead the Labor Day celebration.

“The move to present workers with Labor Day gifts is not new. We are used to receiving pittance from past presidents. It would be much better if he gave in to our demands,” De Guzman said.

Meanwhile, the Federation of Free Workers also appealed to the President to put an end to contractualization in all its forms “and leave a lasting legacy to Philippine labor.”

“The President is seen as a man of action, a no-nonsense supporter of the plight of ordinary people like him… Should he put an end to contractualization in all its forms, he would leave a lasting legacy to Philippine labor,” said Sonny Matula, FFW president.

The labor group also urged the President to encourage the organization of unions in all workplaces, including in export processing zones and free trade zones.

For its part, Nagkaisa said the government should now consider granting workers substantial wage hikes given the rising prices of basic commodities.

The labor group also expressed alarm that some members engaged in legitimate trade union work might have been killed or arrested on trumped up charges under the cloak of the drug war.

“The failure to stamp out the problem of contractualization during the last 10 months gave this administration a bad mark. And unless this failure is rectified… a slide into further isolation from the working class population is a serious problem that will hound this administration,” it said.

The Kilusang Mayo Uno demanded the granting of a “social justice package” or a P750 national minimum wage, free mass housing and an end to contractualization.

The workers’ group also challenged Duterte to fulfill his promise to end all forms of contractualization, since Bello’s order only legitimized it as the government’s employment policy.

“While we recognize the efforts to regularize 45,000 contractuals in 2017, there remains over 24.4 million contractual workers that should be regularized,” the KMU said in a statement.  SFM/rga