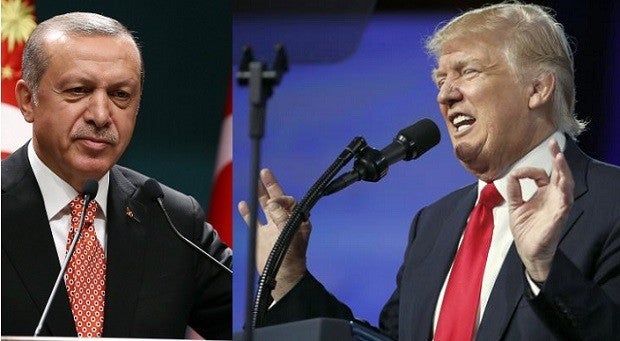 Turkey President Recep Tayyip Erdogan (left) is  sending a stern warning to US President Donald Trump (right) over US support for Kurdish fighters whom Ankara tags as terrorists. INQUIRER FILES

ISTANBUL, Turkey — By launching air strikes against Syrian Kurdish fighters and threatening more action, Turkish President Recep Tayyip Erdogan is seeking to send a tough message to Donald Trump in the hope of bringing about a major U-turn in US Syria policy.

Turkey last week bombed targets of the Kurdish Peoples’ Protection Units (YPG) in Syria, earning the wrath of its Nato ally Washington and on Sunday Erdogan warned more action could be imminent.

“We can come unexpectedly in the night,” said Erdogan. “We are not going to tip off the terror groups and the Turkish Armed Forces could come at any moment.”

The YPG has been seen by the United States as the best ally on the ground in the fight against Islamic State of Iraq and Syria (ISIS) jihadists in Syria and Trump has inherited a policy from Barack Obama of actively supporting the group.

But Ankara says the YPG is a terror outfit and the Syrian branch of the Kurdistan Workers’ Party (PKK), who have waged an insurgency since 1984 inside Turkey that has left tens of thousands dead.

Analysts say the dispute will be the number one issue when Erdogan meets Trump for the first time as president on May 16 in the United States. Failing to resolve the problem could seriously harm US efforts to destroy ISIS in Syria.

“The strikes are manifestly a sign of impatience by Turkey and part of a long line of appeals telling the US to stop supporting the YPG,” said Jean Marcou, professor at Sciences Po Grenoble and associate researcher at the French Institute of Anatolian Studies.

Since Trump’s election, Turkey had indicated it wanted a “change in US policy on the YPG support. But in reality Erdogan has obtained nothing for now,” he said.

The cooperation between Washington and the YPG, which saw the United States send a limited number of forces to work with the group, led to bitter tensions between Ankara and Washington in the dying months of the Obama administration.

The US backed the formation of the Syrian Democratic Forces (SDF), dominated by the YPG but also including Arab fighters, yet Ankara contends it is merely a front from the Kurdish group.

In an unusual move after days of border clashes between the Turkish army and YPG that followed the air strikes, the US sent military vehicles to the Syrian side of the frontier to carry out patrols in an apparent bid to prevent further fighting.

Erdogan said the sight of American flags in the convoy alongside YPG insignia had “seriously saddened” Turkey.

The Turkish president, fresh from winning the controversial April 16 referendum on enhancing his powers, has indicated that the rewards for Washington in breaking up with the YPG could be high by spurring Turkish involvement in a joint operation to take the ISIS fiefdom of Raqa.

Together the United States can “turn Raqa into a graveyard for Daesh (ISIS),” Erdogan said on Saturday.

But Ankara has made clear it will have nothing to do with any operation involving the YPG and analysts say Turkey could even be a threat to a Raqa operation if it is not included.

“Washington was reluctant to launch the Raqa operation before Turkey’s April 16 referendum to avoid potential complications with Ankara,” said Aykan Erdemir, senior fellow at the Foundation for Defense of Democracies.

He said the Turkish air strikes — which were combined with strikes against the PKK in Iraq — brought “another unanticipated challenge” to coalition efforts against the jihadists.

“Tensions among coalition members have been one of the key factors for the Islamic State’s continued survival,” he said.

It said the YPG “is indispensable” to defeat ISIS but there is also “no avoiding the fact” that the US is backing a force “led by PKK-trained cadres in Syria while the PKK itself continues an insurgency against a Nato ally.”

It said that Turkey had pressed ahead with the air strikes despite US objections and this “should serve as a warning for what could lie in store.”

But it said while the YPG was counting on American and also Russian support as a bulwark against Turkey, the importance of the country will mean Trump will have an ear for Erdogan’s concerns.

Ultimately Washington “will likely view relations with Turkey –- a Nato member and critical ally –- as more important to its broader strategic interests,” it said. CBB/rga