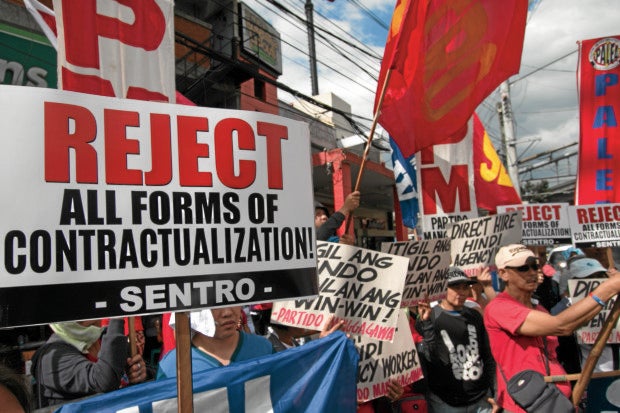 In his fourth month as a machine operator at a can-making factory in Malabon City, Noel decided to quit just before his employment contract ends next month. He came up with the decision despite the government’s new order that sets stricter guidelines for companies on contractual employment.

“Most of the jobs I had were on a contractual basis. I’m hired for five months then I have to find another job,” the 33-year-old father of three from neighboring Navotas City told the Inquirer.

“This time, I decided to leave because I was paid only P300 for eight hours of work. That’s way below the minimum wage. And the company doesn’t care about us. We were not even provided safety gear,” Noel (not his real name) said, pointing out that his job entailed carrying sharp metals.

Noel is one of the many “endo” or end-of-contract workers under what trade unions dub a contractualization scheme, which refers to short-term and unprotected temporary work arrangements.

In Monday’s rallies, labor groups dismayed by the hiring scheme will call on President Duterte to end contractualization and all forms of fixed-term jobs in private and public sector employment, among other issues.

They claim that contractualization offers workers no security of tenure to help them cope with an eroding purchasing power amid price increases of goods and services.

In its many forms, the scheme is rampant in the country.

Endo workers, in particular, are bound by a five-month timeframe so that companies will not make them regular employees after six months under the Labor Code.

From this arrangement stems the 5-5-5 scheme in which workers are hired and fired every five months so that employers will not make them permanent employees and pay them benefits.

Noel wasn’t the only one among his colleagues who work under the endo scheme even after the Department of Labor and Employment (Dole) issued Order No. 174.

“Many of my coworkers, women included, are under contractual basis. Some are even paid P250 a day. It’s so not fair. I hope the Dole can do something about it,” he added.

The endo scheme is restricted by Department Order (DO) No. 174, which prohibits the continuous hiring by a manpower agency (contractor/subcontractor) of a worker under a repeated contract of short duration.

The order superseded DO 18, which contained the original guidelines on contracting and subcontracting.

DO 174 says labor-only contracting in which the agency “merely recruits or supplies workers to perform a job or work” for an employer is the form of contracting that is prohibited.

In labor-only contracting, the agency “does not have substantial capital or investment which relates to the job, work or service to be performed.”

To limit unscrupulous labor agencies, the new order increases the capital requirement of manpower agencies to P5 million from P300,000.

The Dole also shortened the validity of the certificate of registration of contractors from 3 to 2 years and the registration fee was increased from P25,000 to P100,000.

Labor Secretary Silvestre Bello III earlier said that the key to limiting illegal contractualization was through strict monitoring and implementation of DO 174.

He said he had requested a supplemental budget for an additional 200 labor inspectors. Currently, only 535 monitor 950,000 business establishments.

Labor leaders will also be deputized by the department to act as labor compliance inspectors, Bello said.

The Dole has intensified its campaign against illegal forms of contracting and subcontracting as it assures the public that more workers would be regularized with the implementation of DO 174.

Labor Undersecretary Joel Maglunsod said the department had intensified its efforts in conducting a special assessment and visit to establishments and Occupational Safety and Health inspections on companies and employers in the country.

“Our attached agencies, such as the Bureau of Working Conditions, Occupational Safety and Health Center and others, are all taking part in this initiative to provide our workers with secure and healthy jobs,” Maglunsod said.

As of April 20, some 47,000 workers had been regularized by their principal or employers, he said.