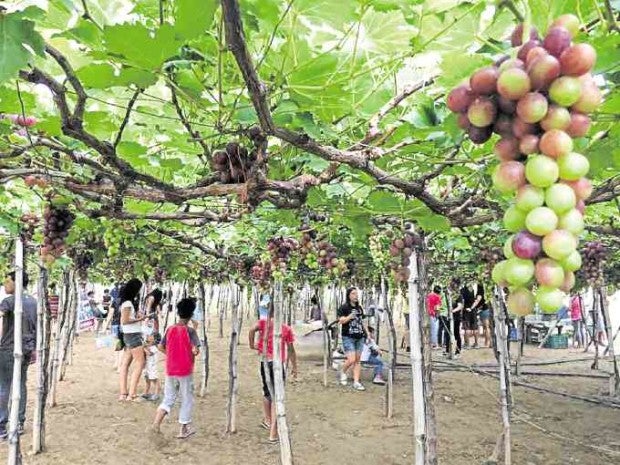 Visitors from different towns and provinces flock to the vineyards of Bauang town, La Union province, to experience picking their own grapes. —YOLANDA SOTELO

BAUANG, LA UNION—Under trellises through which the afternoon sun peeps, tourists pluck bunches of grapes using scissors and place these in baskets. They line up to weigh their harvests and pay for these.

This is how each day plays out in grape farms in this town which allows tourists to personally harvest green or red cardinal grapes straight from vines.

“Grapes are readily available in groceries and supermarkets but people come here for the adventure,” said Virgilio Calica, a grape farmer.

“You can see how their faces light up when they see the fruits hanging from the vine, and they take delight in selecting the fruits and picking them,” he said.

There are at least 50 grape growers in Bauang with an average farm measuring half a hectare, said Gracia Lomboy, manager of Lomboy Grapes Farm. Her father, Avelino, pioneered grape growing in the town in 1972.

The elder Lomboy, a former provincial agriculturist of La Union, started with only 20 cuttings he brought home from Cebu province. But through research, experiments and perseverance, he was able to expand his farm to 25 ha at the height of production.

Almost all vineyard owners learned the technology from the elder Lomboy, including Calica, his former farm helper.

“I started with 76 vines in our backyard in 1984,” said Calica, who now tends a 1,500-square meter vineyard. His five siblings have their own vineyards, too, earning a tidy sum from the vines they planted years ago.

The town’s almost 50-year-old grape industry had its ups and downs, Gracia said. The Lomboy grape farm was producing 90-95 percent of the country’s grape supply before trade liberalization took effect in 1987.

“Import liberalization killed the grape industry. There was no market for our produce and we had to throw grapes away. We had to let go of our workers as we had to close most farms,” she said.

In early 2000, however, a new generation began to appreciate local products. Slowly, the grape industry grew again, although not like its vibrant state before 1987.

Traders came to buy the produce at P120-P150 per kilogram to sell in different provinces, according to Calica.

“Sometimes we try to turn away the tourists because the grapes are not ripe yet but they say they came from a faraway province and they don’t want to waste the trip,” Calica said.

Farmers help each other by endorsing pickers to farms where the fruits are ready for harvesting. The Lomboy farm also helps small growers by letting them stay there and take turns serving customer demand.