US Ambassador Sung Kim: Cool man on a hot seat

Lawyer, prosecutor and now US Ambassador to the Philippines, Sung Kim gets to know Filipinos through their love for basketball, their language, food and President Duterte
By: Cathy Cañares Yamsuan - @inquirerdotnet
Philippine Daily Inquirer / 12:35 AM April 30, 2017 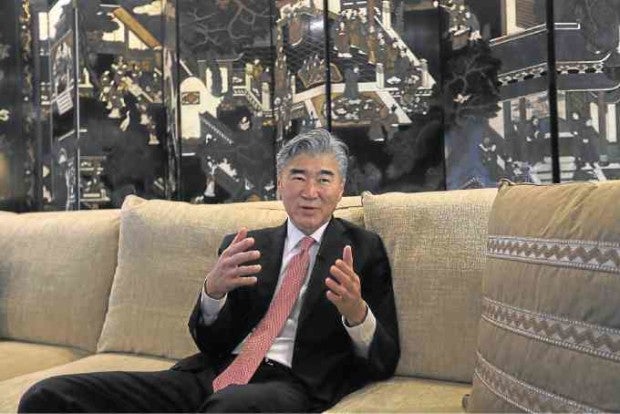 Sung Y. Kim remembers being “very” embarrassed after then US Secretary of State John Kerry called him the “George Clooney of the Foreign Service” during the ceremony for his swearing-in as the United States’ ambassador to the Philippines last November.

“I think Secretary Kerry just wanted to have some fun at my expense. Or maybe his speech writers thought it might be a funny line. The audience seemed to enjoy it,” Kim said.

He noted the “huge contingent of Filipino-Americans” during the event held in Washington, a detail that he said made it “even more special.”

Standing 1.8 meters tall, the suave and slender 56-year-old diplomat of Korean descent has been described by colleagues as a charmer with “outstanding managerial skills, open interpersonal style and [the] ability to work well with numerous US government agencies on sensitive issues and priorities.”

Colleagues also note that his solid career background and focus on the Asia-Pacific region—including stints in Seoul, Tokyo, Kuala Lumpur and Hong Kong—make him a perfect fit for the Manila posting. (Kim also had assignments that involved crucial discussions about North Korea and Chinese affairs.)

Kim’s undisputed cool was evident when he remained calm at an event where President Duterte slammed the United States for its decision to withhold $400 million in antipoverty aid from the Millennium Challenge Corp. over human rights concerns.

Kim showed the same gracious demeanor when Inquirer asked about his meetings with Mr. Duterte in an exclusive interview at the ambassador’s residence in Forbes Park, Makati City.

He had met Mr. Duterte thrice so far — twice in Davao City and once in Manila when he presented his credentials to the President in Malacañang.

“We had a long meeting [then]. I think the President appreciates the relationship between the US and the Philippines. I think both the White House and Malacañang are strongly committed to maintaining this alliance.  In fact, not just maintaining, but strengthening and deepening aspects of [this] relationship,” he said.

Kim said he was excited about coming to the Philippines, a feeling shared by his wife, Jae, and daughters Erin and Erica.

“Obviously, we have a long [and] deep history with the Philippines—our oldest alliance country in the region and there are many important facets to the relationship, not the least of which is the deep people-to-people ties,” he said.

Kim cited as well the 4 million Filipino-Americans “living, working (in the United States) [and] contributing to [its economy]. We also have over 300,000 American citizens living, working [and] traveling to the Philippines at any given time.”

One of his earliest outings was at SM Mall of Asia (MOA) where the confessed basketball fan watched the first game between Ateneo and La Salle men’s team. 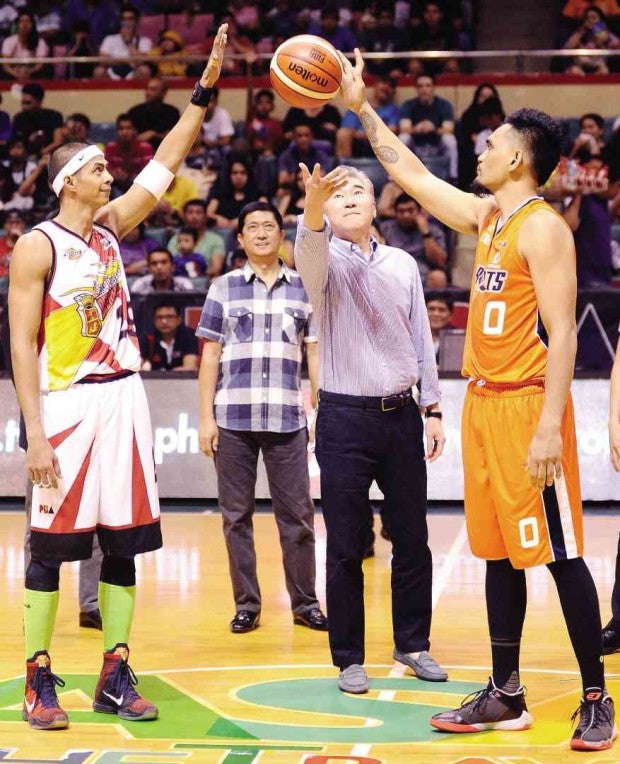 BASKETBALL FANKim does the ceremonial toss at a game between San Miguel Beer and Meralco. —AUGUST DELA CRUZ

“I was impressed by the level of play, really very good.  But [I was] even more impressed by the intensity and competition between the two schools.  We have some big rivalries in the US—Duke vs North Carolina, UCLA vs USC, but I think the rivalry between Ateneo and La Salle is even more intense.  So that made the game even more exciting,” he said.

Kim credited the “terrific and really smart” embassy staff for securing him a seat in the MOA Arena that positioned him right in the middle of the two opposing schools. He was also advised not to wear either blue or green lest he offend some fans.

“So I was completely neutral, I would not want to be accused of bias so early in my tenure as ambassador,” he said.

“My staff is working very hard to get me a seat in the middle,” he said.

He, however, described the Golden State Warriors’ rival, the Cleveland Cavaliers, as “an exciting team.”

His fondness for basketball began when he, at 13, moved to Los Angeles (LA), where his father, also a diplomat, was assigned after a posting in Tokyo.

The teener who spent his first 10 years in South Korea grew up watching Magic Johnson and Kareem Abdul Jabbar of the LA Lakers while working through junior high school. 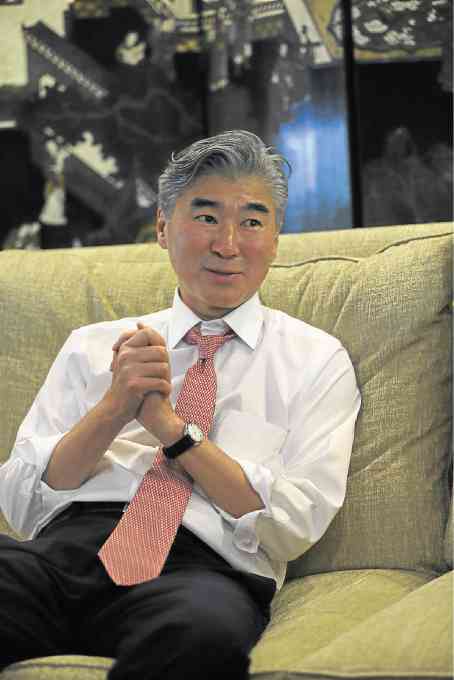 Kim later earned a bachelor’s degree from the University of Pennsylvania and went back to Los Angeles to study at  Loyola University Law School.

He later got a master’s degree in law from the London School of Economics and Political Science, after which he returned to Los Angeles to become a prosecutor.

At one point, Kim took the diplomatic service exam and thought he might try diplomacy.

“A few things appealed to me,” he said. “The idea of representing the US overseas, being able to work on important policy issues and important relationships between countries, and living overseas.”

Being young and single then, he thought he would try for a couple of years and go back to the prosecutor’s office because he was enjoying work as a prosecutor.

“But as it turned out, I stayed with the foreign service and it’s been about 28 years now.  I have absolutely no regrets about having made the switch from law to diplomacy,” he said.

Kim mentioned his stint as US ambassador to South Korea as his most memorable before coming to the Philippines.

“Being the first Korean-American ambassador to Korea, my home country, was of course very, very special. And now being able to serve as US ambassador to this great country and to this important relationship is a tremendous honor … I just feel that I was incredibly lucky to have found two professions that I actually enjoyed.  More broadly, I’ve always been interested in public service, even when I was in law school,” Kim said.

Filipinos, he said, should consider a career in foreign service, as there is great pride in representing one’s country abroad.

“There is tremendous potential in the Philippines—a young population, a hardworking population [and] tremendous resources so I think there’s a lot that young Filipino diplomats would be able to do in diplomacy,” the US ambassador  said.

The ride in Manila has been great so far. Aside from Davao, he has been to Zamboanga City once and to Baguio City “for a couple of short visits.”

“Almost every place I visited, I received a warm reception.  One of the first trips I took to Baguio, I had a chance to meet a lot of people, prominent people in that area.  [I cannot point to] a specific instance but it’s the feeling you get when you meet the people [who] seem genuinely welcoming and friendly. I feel grateful for that,” he said.

And now, some inevitable questions.

Had he been to Boracay yet?

“I would like to.  Yes, I heard about the beautiful white sand.  I haven’t been to Cebu yet, either,” he said.

Kim said he was “not sure” whether he was “that adventurous” when asked whether he had tried “balut.”

Adobo, however, is “fast becoming one of my favorite dishes and surprisingly, I didn’t think I would like lechon very much but I actually [did],” he said.

Kim smiled sheepishly when asked about Filipino words or phrases he had learned so far.

“You know, I’ve started taking lessons but my schedule is pretty hectic so I’ve missed many lessons and I apologize to my teacher for this.  But that’s probably a less serious problem than the fact that at my age, my brainpower, at least to learn languages, has diminished greatly.  I’ve learned phrases but the question is how long I can actually retain those—salamat po, magandang umaga is good morning; [magandang] tanghali is good afternoon. I know a few phrases but need to study much harder.”

The George Clooney charm emerged anew when Kim was asked about the horrendous Manila traffic.

“Many large cities in Asia have traffic issues. Manila is not unique but it does have very heavy traffic. I’m getting used to working a lot in the car and spend a lot of time [on] my BlackBerry, checking my e-mails and text messages,” he said.

He reads a stack of newspapers he brings along in the morning or uses the lull inside the vehicle to unwind during the evening rush hour, he said.

“I think it’s encouraging that policymakers in Manila are trying to address the issue.  Everybody agrees there is bad traffic in Manila.  The important thing is what do you do about it? My sense is that senior officials in the Philippine government are quite focused on finding a way to deal with this challenge.  I hope they find a solution,” he said.