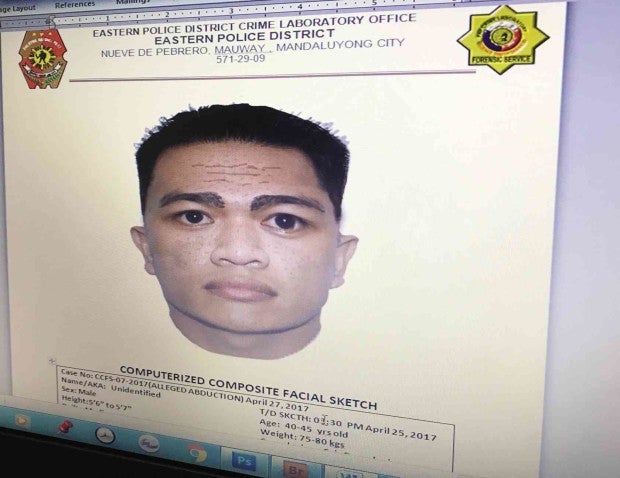 Facial composite of one of the suspects —EPD PHOTO

A cockfighting aficionado who had just won a huge sum of money in a cockfight was abducted and robbed by four men in Mandaluyong City on Wednesday evening.

Warlie Tan, an official of a plastic bag packaging company, said that his captors, who wore bonnets and were armed with high-powered firearms and handguns, let him go after they realized that he was not carrying the cash prize of P200,000.

Tan, 36, told reporters on Thursday that when he left the San Juan cockpit arena around 8:30 p.m. on Wednesday, he noticed that he was being followed by a white Toyota Vios.

This prompted him to hide the cash prize inside his vehicle. As he parked near his house in Mandaluyong City, four armed men, three of them wearing masks, alighted from the Vios and surrounded him.

One of the suspects introduced himself as a policeman, Tan said. “We know you and your whereabouts. We have been planning this earlier,” he was told.

The suspects hit Tan several times when he resisted.

One of them fired his gun into the ground, pointed it at Tan and forcibly dragged him into the Vios. The rest also got inside the vehicle which started moving.

Tan said that once he was inside the vehicle, they tried to handcuff him while asking him where the P200,000 cash prize was. One of the suspects also attempted to put a sachet of what appeared to be “shabu” (methamphetamin hydrochloride) in his pocket but did not push through with it. All the while, the Vios was roving around the Barangay Wack Wack area, Tan told the police.

“They were pondering on killing me but they said they would give me a chance,” Tan said, adding that they threatened to go after him and his family if he went to the police.

Tan was eventually released by his captors. He took a cab which brought him home.

Tan said that three of the armed men appeared to be policemen, judging by their actions and the long firearms they were carrying. The fourth seemed to be a civilian.

On Thursday morning, he went to the National Police Commission to ask for help. Insp. Marvin Trigo of Napolcom-Central office later inspected the area where the alleged kidnapping took place before accompanying Tan to the Mandaluyong police.

Chief Insp. Norman dela Rosa, chief of the station investigation and detection unit of the Mandaluyong police, said that they could not yet confirm if some of the suspects were policemen.

“Anyone can make an allegation so we cannot conclude [anything] yet,” he told reporters, adding that they were trying to see if the incident was captured by closed circuit television cameras.

Based on the description given by Tan, the police came up with a composite sketch of one of the suspects, the “civilian” who was not initially wearing a mask when first seen by the victim. He was described as around 40 to 45 years old, of medium build and around 5’6” tall.

Read Next
MMDA guarding gains in Baclaran
EDITORS' PICK
Nesthy Petecio assured of Olympics bronze, ousts Colombian foe
Connect to PH’s fastest network with new Signature Plan Lite at only P599 per month
Trillanes: No Magdalo support if Robredo gives way to Lacson
Harnessing technology for quality education
After Olympic win, PAF promotes Hidilyn Diaz to staff sergeant
Tips for a cheerful life
MOST READ
Philippines to bring home multiple Olympic medals for first time since 1932
Isko for 2022? Manila mayor takes a swipe at Duterte in live broadcast
Lacson bares talks with Robredo ahead of 2022 polls
Why is Taiwan not called Taiwan at the Olympics?
Don't miss out on the latest news and information.