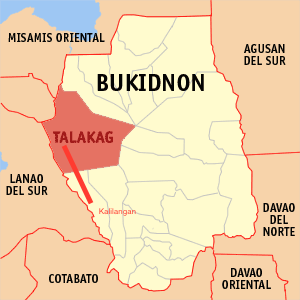 Bishop Felixberto Calang of the Iglesia Filipina Independiente (IFI) said Police Officer 2 Gerome Anthony Natividad, was turned over unharmed and in fine shape to the third-party facilitator by the NPA custodial force.

Calang is the co-convenor of the Philippine Ecumenical Peace Platform (PEPP) and main convenor of Sowing the Seeds of Peace in Mindanao, two organizations that brokered Natividad’s freedom.

He said Natividad appeared to be in good health as his family met him during the release in Dominorog village.

“There was no scratch on him. He was mentally alert. The NPA custodial force has assured us that PO2 Natividad was not hurt in the entire time that he was in captivity,” Calang told the Philippine Daily Inquirer in an interview Thursday afternoon.

Calang said the third-party facilitator turned Natividad over to the local government officials of Kalilangan town in Bukidnon and he was escorted and brought to the Talakag municipal police office where he had been assigned prior to his kidnapping.

Natividad was taken by the NPA fighters on Feb. 9 as they set up a roadblock in Barangay Tikalaan, Talakag, Bukidnon.

The NPA earlier said it would only release Natividad if the Philippine Army and the Philippine National Police would temporarily suspended their operations in dozens of villages in Bukidnon.

In a statement, the Philippine Army’s 4th Infantry Division refused to declare a suspension of military operation, saying it would leave it up to the NPA to release the policeman on their own volition.

In a meeting, Cagayan de Oro City Mayor Oscar Moreno, head of the Regional Peace and Order Council (RPOC), and the third-party facilitator had proposed that the military order a “stand down” of its troops for six days in the area where the release was to take place, through the “Expression of Aspiration” document signed by Moreno.

“The Military Forces now stationed in the Northern and Central Bukidnon areas will remain in their respective areas and refrain from conducting offensive operations that will jeopardize the safe release and handover process,” read part of the document.

“We drew up a plan for the military stand-down three days prior and three days after the date of the release to avoid any encounter between the NPA custodial force and government soldiers,” he added.

He said the 4ID, through Col. Jesse Alvarez, the assistant division commander, had agreed to the idea and it was then relayed to the local National Democratic Front chapter.

Calang said the NPA acceded to the plan that the communist rebels’ custodial force be given safe passage for six days if they push through with the release.

On April 19, two soldiers captured by communist rebels nearly three months ago were released to their families in Matanao, Davao del Sur.

The release of Sergeant Solaiman Calocop and Private First Class Samuel Garay was seen to further bolster the on-going peace talks between the government and insurgents.

The two soldiers were snatched by NPA rebels as they were heading back to their camp in Columbio, Sultan Kudarat in February.

Ka Marcelo Dilaab, the spokesperson of the NPA’s Mt. Alip Sub-regional Committee, said the soldiers were freed based on an order given by the regional executive council of the National Democratic Front of the Philippines (NDFP) and the national operations command of the NPA.

The rebel spokesperson said the two prisoners of war (POWs) were also freed on humanitarian grounds based on the Geneva Convention.

“It also showed NDFP’s affirmation and positive response to the widespread calls of organizations and individuals for a negotiated settlement with respect to the issue of POWs,” Dilaab said, quoting the order signed by NPA regional chief Efren Aksasato.

The release came even as the military refused to heed the rebels’ call for a declaration of a suspension of military operations (SOMOs) and suspension of offensive police operations (SOPO) in areas where the release was earlier planned, the rebel spokesperson said. (With reports from Frinston Lim, Inquirer Mindanao, INQ)  SFM/rga