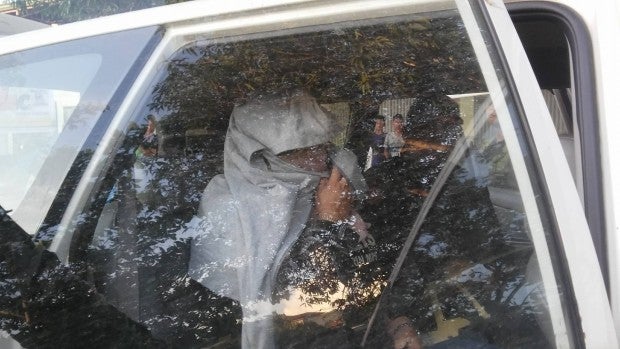 Supt. Maria Cristina Nobleza, deputy regional chief of the PNP Crime Lab in the Davao Region, hides her face from reporters.  She and her alleged partner, Renierlou Dongon were arrested in Clarin. Bohol on Apr. 22, 2017 for trying to evade a checkpoint..  (PHOTO BY BENJIE TALISIC /INQUIRER VISAYAS)

The Northern Mindanao Police Office said in a report that a composite team of policemen and soldiers raided Nobleza’s house at Pine Hills in Barangay Casisang in Malaybalay City on Monday and recovered an M-16 rifle and ammunition magazines, a loaded .45-pistol with seven cartridges, and components for an improvised explosive device such as a timer, blasting cap, a tester and a nine-volt battery.

The raid was backed by a search warrant issued by Judge Maria Theresa Aban-Camannong of the Regional Trial Court Branch 9 in Malaybalay City.

The regional police office said the recovered items were brought to the Criminal Investigation and Detection Group (CIDG) office here and will be used as evidence in the filing of charges of illegal possession of firearms and possession of explosives against Nobleza under Republic Act 10591 and Republic Act 9516.

The regional police office said two minors were also found inside Nobleza’s house and had been turned over to proper authorities.

In Davao City, Supt. Georgy Manuel, the chief of the Southern Mindanao Regional Crime Laboratory, said he and Nobleza had barely talked since the latter was assigned here in February.

“We were both busy with our tasks,” Manuel said.

But Manuel said even then, he had asked his men how Nobleza was as a person and a co-worker, and was told that “she was deep.”

“Some of my men would also hear her use an unfamiliar dialect in phone conversations with unidentified callers,” Manuel said.

Nobleza, the Inquirer has learned, speaks several dialects including Bicolano.

He said some of the Scene of the Crime Office (Soco) personnel here also had a chance to accompany Nobleza when she visited a lot she purchased in Barangay Buhangin in Davao City.

“She was building a house because she had been staying in hotels since her reassignment in Davao from Camp Crame,” Manuel said. (With a report from Allan Nawal, Inquirer Mindanao, INQ) SFM

Read Next
US sets up missile defense in South Korea as North shows power
EDITORS' PICK
Seventh judge assigned to handle De Lima case
Beyond water service: Maynilad builds massive infrastructure projects to clean up Metro Manila waterways
Timeless Elegance in the Philippines’ Most Distinguished Home Kitchens
Museums ‘put to sleep,’ churches closed amid volcano’s unrest
PH preps for China virus: Question of when, not if
SM continues to send relief assistance to remote towns in Batangas
MOST READ
Lacson on Duterte’s threat to end VFA over Bato’s canceled visa: Where is the connection?
Part of Aurora Boulevard in Cubao closed from Jan. 25 – Feb. 1
No Bato visa, no VFA–Duterte
Corruption worsens: PH falls 14 notches to 113th spot in global index 2019
Don't miss out on the latest news and information.