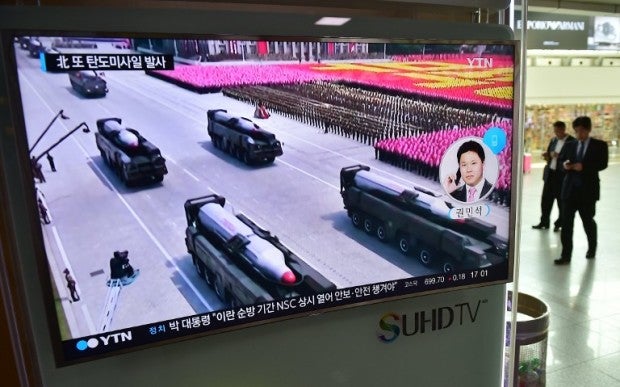 Travellers walk past a TV screen showing a file footage of North Korean missiles at a railway station in Seoul on April 28, 2016. Trailers carrying US THAAD missile defense equipment entered a deployment site in South Korea early Wednesday, April 26, 2017, to counter the missile threat from the North.  AFP

Arrival of the six trailers at the golf course location sparked clashes between locals and police, the agency said.

Washington and Seoul are deploying the Terminal High Altitude Area Defense (THAAD) battery to counter the threat from North Korea, which is pushing ahead with its ballistic missile program despite multiple sets of UN sanctions.

The THAAD system is meant to intercept and destroy short and medium-range ballistic missiles during their final phase of flight.

The North is also believed to be preparing for a sixth nuclear weapons test.

Washington and Seoul agreed to early deployment of the missile defense system after talks earlier this month between the South’s acting president and visiting US Vice President Mike Pence.

China however is strongly opposed to deployment of the THAAD system which it fears will undermine its own military capabilities.

Tensions on the Korean peninsula have soared in recent months as North Korea’s missile tests have brought ever-more bellicose warnings from US President Donald Trump’s administration.

The United States has deployed an aircraft carrier strike group led by the USS Carl Vinson to the western Pacific.

Trump has indicated he is willing to ramp up US military pressure on North Korea while simultaneously encouraging China to use its influence on its ally, and reject bilateral diplomacy with Pyongyang.

The US has long pushed for China to make more efforts to curb Pyongyang’s behavior.

But Beijing has resisted, concerned that a regime collapse could trigger a flood of refugees across the border and leave the US military on its doorstep.

However, it has become increasingly concerned as tensions rise in the flashpoint region, with experts warning of the possibility of a sixth nuclear test by the North.

US defense leaders and other top officials are to give a classified briefing on North Korea to all senators in an unusual meeting at the White House later Wednesday. CBB