Arrest warrant out for bomber 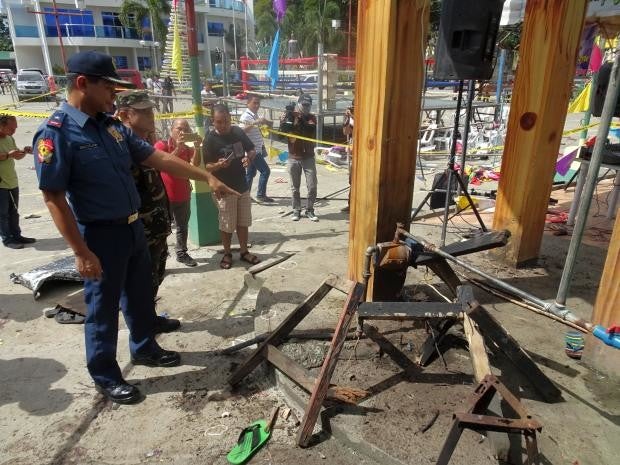 TACLOBAN CITY—A man linked to attempts to bomb the United States Embassy and the Black Nazarene procession in Manila is now a subject of a manhunt after a court issued a warrant for his arrest for his role in two explosions that rocked the town plaza of Hilongos in Leyte province in December last year.

Macuto and two unidentified companions were charged with multiple frustrated murder at the sala of Judge Suarez Abando of RTC Branch 18. The court has set a P200,000 bail bond for each accused.

The blasts at a park in the town center of Hilongos during the fiesta celebration on Dec. 28 wounded 32 people, 10 of them children.

Two improvised explosive devices went off in a span of a minute while more than 1,000 people were watching an amateur boxing match at Rizal Plaza, across the Hilongos town hall.

Police said some residents of Concepcion identified Macuto as behind the bombings.

Rentuaya said Macuto, before moving to Hilongos, lived in Lanao del Norte province and was seen moving around Maguindanao province.

She said the police received information that Macuto had ties to the group behind previous plots to bomb the US Embassy compound on Roxas Boulevard in Manila and the annual religious procession of the image of the Black Nazarene in Quiapo district, also in Manila.

Hilongos Mayor Albert Villahermosa, in an earlier interview, believed the evidence gathered by the police against Macuto’s group was strong.

Villahermosa said he knew the parents of Macuto, whose father belonged to a prominent family in Hilongos.

But the mayor said he did not personally know the suspect, who he described as about 25 years old, because the latter had been living with his mother in Cavite province.