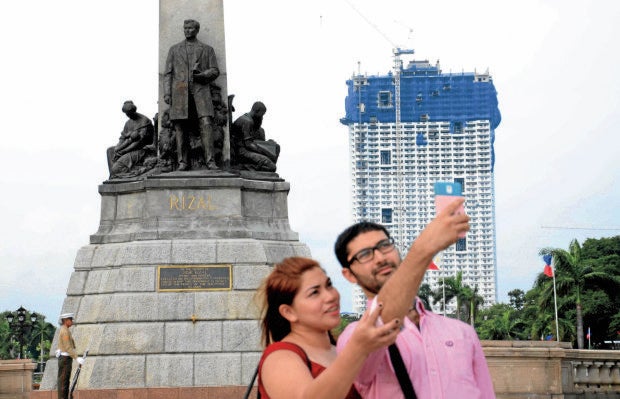 ‘PHOTOBOMB’ A tourist takes a selfie in front of the Rizal Monument at Luneta Park in Manila, with Torre de Manila, dubbed “national photobomb,” then undergoing construction in the background. —ARNOLD ALMACEN

After a two-year lull, the construction of Torre de Manila, dubbed “pambansang photobomb” by netizens, may now proceed.

The Supreme Court on Tuesday rejected a petition questioning the construction of the 49-story residential building, which its critics claimed ruined the view of the skyline behind the historic monument of national hero Dr. Jose Rizal at Luneta Park.

Citing lack of jurisdiction, the magistrates voted 9-6 to throw out the petition for mandamus filed in 2014 by the Knights of Rizal against DM Consunji Inc. (DMCI), owner and developer of Torre de Manila.

In a statement, the Knights of Rizal said it respected the high court’s ruling as it expressed gratitude to the public “for carrying this issue with us and for making the same as a test case for Philippine heritage.”

“The public support that was expressed in favor of our stand was an indication not only of the importance of the national monument, but also of the continued relevance and reverence our national hero, Jose Rizal, still enjoys,” the group said.

For its part, DMCI Homes welcomed the outcome of the legal battle, which it described as “fair and just.” The developer said it would “immediately advise its customers and future residents on the updated construction timeline,” which had been affected by the controversy.

“Moving on, we will immediately resume construction to finally end the undue suffering of our stakeholders, most especially our workers and future residents who depended on our commitment to complete the project,” DMCI Homes said.

The Knights of Rizal, supported by the Office of the Solicitor General, had sought the “immediate and complete demolition” of the condominium building on Taft Avenue in Ermita, Manila.

Theodore Te, the high court’s spokesperson, said the tribunal also lifted the temporary restraining order (TRO) it issued in June 2015 against DMCI, which indefinitely put on hold the construction of Torre de Manila.

“The court dismissed the petition … for the reasons that (it) has no jurisdiction over the subject matter,” Te said in a news conference in Baguio City, where the justices are holding their annual summer full-court session.

He said the tribunal likewise ruled that the petitioners “have no standing to sue” and that they failed to prove that “they stand to suffer no injury.”

“The court also found that there is no law that prohibits the construction of the challenged Torre de Manila,” Te said.

In urging the court to order the demolition of the building, the Knights of Rizal claimed DMCI violated several laws in building Torre de Manila, including Republic Act No. 4846, or the Cultural Properties Preservation and Protection Act; Republic Act No. 7356, the law that created the National Commission on Culture and the Arts; and Republic Act No. 10066, better known as the National Cultural Heritage Act of 2009.

DMCI denied the allegations as it lamented that stopping the project could lead to about P4.27 billion in forgone revenue and capital investment for the company.

Before the high court issued the TRO, the Consunji-owned property developer said it had already spent P1.28 billion for the project.

On the DMCI website, the developer described Torre de Manila as “an exclusive residential community right in the heart of the city [with] leading universities, reputable hospitals, and key business and commercial centers of the Metro area all within easy drive or commute.”

Jardeleza would file a separate dissenting opinion on the issue.