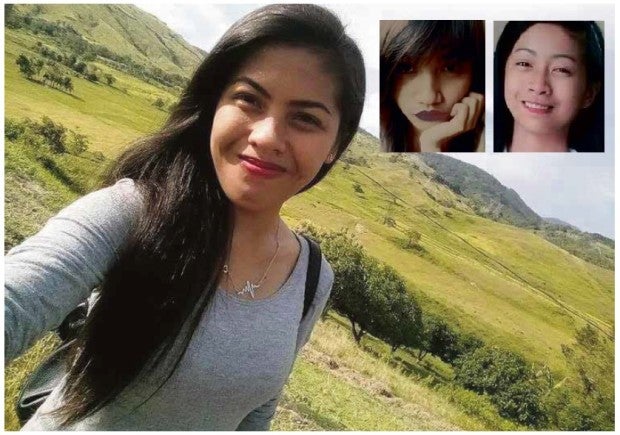 The disappearances and murders of Erica Jean, Maria Clariz (left inset) and Mary Jane (right inset) in Zamboanga City had been added to a growing list of similar cases involving women victims which police simply described as mysterious but not related to each other. —CONTRIBUTED PHOTOS

Erica Jean Rosal, 20, left home on Jan. 4. Two days later, she was found dead, her face smashed beyond recognition and her hands tied with a nylon rope behind her back.

Maria Clariz and Erica Jean were the fifth and sixth victims of what police said were mysterious cases of disappearances and murder of women in the city.

Before Maria Clariz and Erica Jean, four other women had gone missing and their bodies found but police said the cases were unrelated. They saw no common link. The only thing common among the cases was they were all unsolved.

Maria Clariz’s family had gone looking for her and ended their search in a grave site in the village of Pasonanca, barely 2 kilometers from their home.

Village officials said they had found the naked body of an unidentified woman, who turned out to be Maria Clariz, and buried it.

The remains of Maria Clariz bore signs of heavy beating—her face was smashed beyond recognition.

“We didn’t immediately recognize her,” said her elder brother, Julius.

“It was the tattoo on her nape and her slippers that confirmed to us that it was her,” he said.

In January, Erica Jean’s body was found in another village, Lunzuran, with the same sign of torture—a face smashed beyond recognition.

Erica Jean’s could be typical of the cases of disappearances of women and the discovery of their bodies days, or months, after they were last seen alive.

According to Chief Insp. Arlan Delumpines, chief of a police station in the city, Erica Jean left home on Jan. 5 to sleep over at a classmate’s house supposedly for a school project. On Jan. 5, she left her classmate’s house to return home. She never did.

On Jan. 6, Erica Jean’s body was found some 7 km from the village of Baliwasan, where her classmate lived. Her remains were dumped on a vacant lot under a tree.

The cases of Maria Clariz and Erica Jean sowed fear among residents who still remember previous other cases of women disappearing only to be found dead later.

Such was the case of Maricel Macrohon, a 33-year-old laundry woman, who was found dead in Townville Subdivision on Oct. 4, 2016.

It was also the case of two women, still unidentified and estimated to be 20 to 30 years old, who were found dead six months ago in the village of Limpapa. No one came forward to identify them until they were buried in a grave site for unclaimed bodies.

Previous to those cases, on Nov. 12, 2015, Mary Jane Herrera, 16 and a high school student of the Don Pablo Lorenzo Memorial High School, left home to meet classmates for a school project and to practice dancing. She never returned home.

A month later, her family’s search for Mary Jane ended in a house in the village of Pasay where workers digging a deep well accidentally found a skeleton still wearing a school uniform, with a school bag and ID. It was Mary Jane.

“We ask law enforcers to please, do your job,” Julius, Maria Clariz’s brother, said. “This appeal is not just for us, this is for everyone. You have children and we have children who may be victimized next.”

Erica Jean and Maria Clariz belonged to the same dance group and studied in the same school, Zamboanga State College of Marines Science and Technology.

“The killers are confident that they will not be caught because, as you can see, they continue to commit crimes,” Gail said.

“I am deeply saddened by the statement of the police that these killings are not related,” she added.

“I hope they keep their eyes open, instead of dismissing all these gruesome crimes as unrelated,” she said.

Police had said that Erica Jean, a graduating student, could have been raped before she was killed.

The cases worried Melinda Villavieja, a 54-year-old mother of four.

“No one has been put to jail,” she said.

“So far, we haven’t seen any indication that a serial killer was involved,” Magnaye said.

Mayor Maria Isabelle Climaco-Salazar said she had asked police to solve the cases, but fell short of imposing a deadline.

She instead urged parents to keep a close watch on their children.

“It’s important that parents must have supervision of their children,” the mayor said. —JULIE ALIPALA