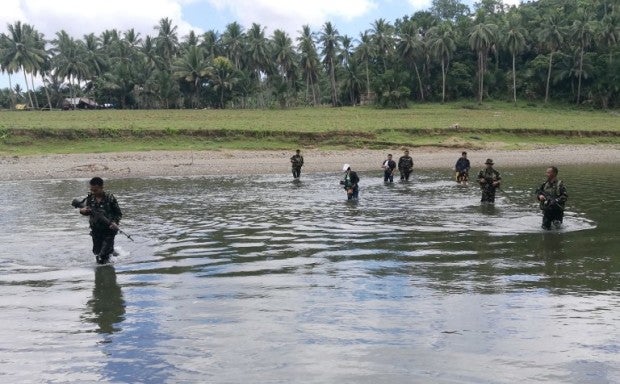 Soldiers wade through a river as they search for the hideout of Islamic militants in Inabanga town, Bohol province, in the central Philippines on April 12, 2017. AFP

CLARIN, Bohol — A female police officer assigned in Davao Region and her driver have been detained on suspicion that they were here to rescue the remaining Abu Sayyaf members who were being hunted down by government troops.

Supt. Maria Christina Nobleza and Reenor Lou Dungon tried to drive past a police checkpoint past 8 p.m. on Saturday, about the same time when police and military teams were hunting down the bandit group and later killed three of the members.

Military sources claimed that Nobleza, deputy regional chief of the crime laboratory in Region 11, claimed that they were in Clarin on a tour.

But investigators were not buying it after they recovered Nobleza’s cellular phone and saw a text message purportedly from one of the Abu Sayyaf members, begging to be rescued.

Intelligence sources said Dungon was said to be a brother-in-law of an Abu Sayyaf leader.

With the two were an elderly woman and a teenager.

Government troops had locked down parts of Barangay Bacani here after the presence of the remaining Abu Sayyaf members was detected following a tip from a habal-habal driver.

Four Abu Sayyaf members had been killed since Saturday, including Joselito Melloria, a native of Barangay Napo in adjacent Inabanga town.

Melloria was killed past 3 p.m. on Saturday while the three unidentified others, in the evening.

According to the military, Melloria carried the alias Abu Alih and assumed the leadership of the remaining Abu Sayyaf members who escaped the government siege in Napo in April 11 that left at least four of his comrades, including their leader Abu Rami, dead.

They were later found to be hiding in a cave in Bacani, a place familiar to Melloria because he studied high school in Clarin.

About 9 p.m. on Saturday, a black Nissan Navara pickup drove past a police check in Barangay Bacani, prompting soldiers to chase the vehicle.

The chase ended in Sitio Kabasakan, still in Bacani, which was just about 150 meters away from the cave that served as the hideout of the remaining Abu Sayyaf members.

While at the police station, Nobleza went to the toilet, pretending to pee, according to the police official who was privy to the interrogation but was not authorized to give a statement to the media.

Based on the text messages on the sim card, it appeared that Nobleza was communicating with the remaining Abu Sayyaf members in Clarin who were asking to be rescued.

When interrogated, Nobleza told her interrogators that she was in a tour in Bohol and just passed by the area, a police source said. She didn’t give any answer except, “I invoke my right to privacy,” which was her response to the questions.

In the meantime, the four slain Abu Sayyaf members including Melloria were buried in a public cemetery in Clarin past 3 p.m. in keeping with the Islam laws that the body should be buried within 24 hours from the time of death.

Only Melloria was claimed by his relatives from Barangay Napo, Inbanga while the three others remained unidentified.

The three bodies were individually wrapped with white cloth while Melloria was placed inside a white coffin.

The family of Melloria attended the burial including his 86 year-old mother Maria Norma who arrived at the morgue about 3 p.m., just 30 minutes before the burial.

A distraught mother cried upon seeing the body of his son whom she described as “buotan nga anak (a good son).”

With the four members dead, the government troopers were hunting down three more who were believed to be still in the mountains of Clarin.

“Based on our intelligence report, there were only three left,” said Capt. Jojo Mascariñas, 302nd Brigade spokesperson.

Of the three, he added, only one was armed, making it easier for the government troops to get them.

“With Joselito dead, there is no one left for them to serve as a guide. They are not familiar with the place,” he added. With Benjie Talisic, INQ/JE